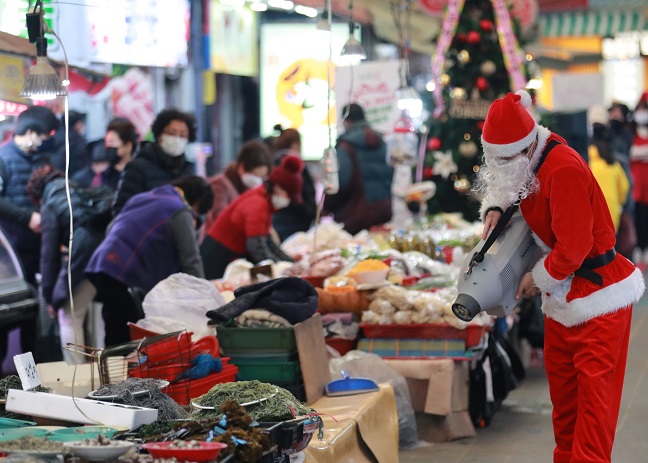 Wearing a Santa Claus outfit, an official from the local office of the SMEs and Startups disinfects a traditional market in the southeastern port city of Busan on Dec. 20, 2021, as part of efforts to support self-employed workers and small merchants hit by slack business amid the coronavirus pandemic. (Yonhap)

SEOUL, Dec. 21 (Korea Bizwire) — South Korea’s new coronavirus cases were below 6,000 for the second day in a row Tuesday, but the number of new critically ill patients exceeded 1,000 again.

The bed occupancy rate in intensive care units for COVID-19 patients stood at 80.7 percent as of 5 p.m. on Monday. The comparative figure for the wider Seoul area came to 87.7 percent.

It is considered the saturation point when the figure exceeds 75 percent. As of midnight Tuesday, 420 COVID-19 patients in the wider Seoul area were waiting to be admitted to hospitals while undergoing at-home treatment.

The country added 52 more deaths from COVID-19, bringing the total to 4,828. The fatality rate stood at 0.84 percent, unchanged from a day earlier.

Health authorities and local governments, meanwhile, had reported 6,449 new cases as of 9 p.m., up 2,210 from the same time the previous day. 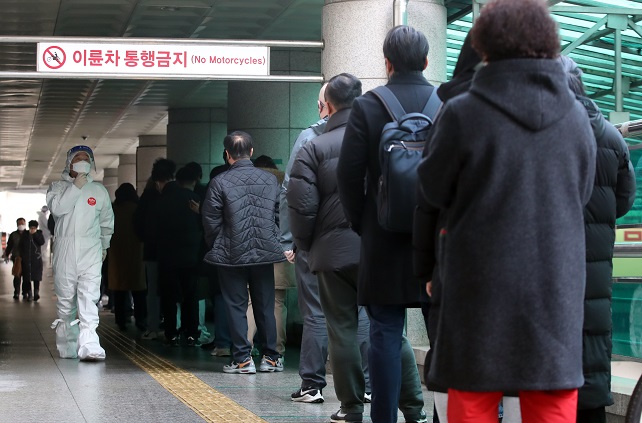 On Saturday, the government reimposed a set of revised virus restrictions across the country, which will remain in effect until Jan. 2 to stem the spread of the virus.

It marks a reversal of the government’s “living with COVID-19″ scheme that began last month, with an aim to regain normalcy by relaxing virus restrictions in phased steps.

Under the new measures, the maximum size of private gatherings is limited to four people nationwide, from the previous limit of six in the capital area and eight elsewhere.

A 9 p.m. or 10 p.m. curfew is applied to businesses as well, depending on their type of service.

Meanwhile, the authorities said they are not mulling applying the country’s “vaccine pass” system to children aged between 5 and 11.

Under the system, only fully vaccinated individuals aged over 18 and those with negative COVID-19 test results can visit businesses, such as restaurants, cafes, and internet cafes, with other people.

The KDCA said 58 cases came from overseas, raising the caseload to 16,446.

As of Tuesday, 84.9 percent of the country’s 52 million people had received their first shots of COVID-19 vaccines, and 82 percent had been fully vaccinated, while 24.1 percent had gotten booster shots, the KDCA said.