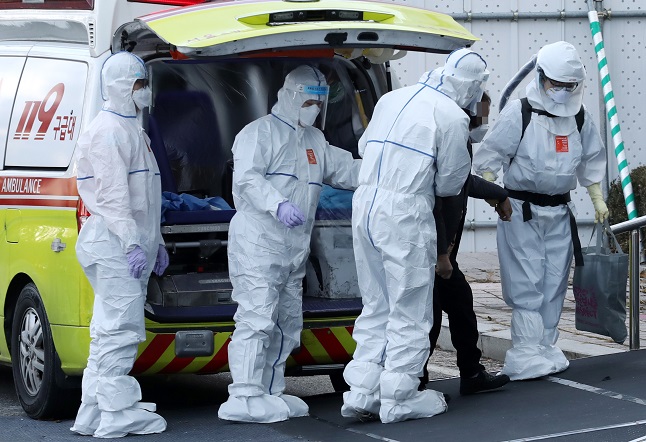 The country added 6,689 new COVID-19 infections, raising the total caseload to 517,271, which is down from 6,977 the previous day, but represents the largest ever daily caseload for any Sunday since the pandemic began last year, according to the Korea Disease Control and Prevention Agency (KDCA).

The number of critically ill COVID-19 patients reached an all-time high of 894, according to the KDCA. Critical cases rose to over 400 earlier this month for the first time since end-August, and grew to over 800 last week. The previous record was 857 reported on Thursday.

Health authorities and local governments had reported 4,564 new cases as of 9 p.m., down 917 from the same time the previous day. Daily cases are counted until midnight and announced the following morning.

The KDCA has confirmed 15 more omicron cases, including four entrants from overseas, raising the total to 90.

Seven of the new variant cases were linked to an Afghan student residing in North Jeolla Province, who arrived in South Korea from Iran late last month and was confirmed on Friday to have been infected with the omicron variant, according to the health authorities.

The number of omicron cases is feared to grow further as the country reported 32 additional suspected cases on Sunday.

Daily infections soared to a record high of 7,174 cases on Wednesday and remained above 7,000 for the following two days. Daily cases have stayed in the quadruple digits since July 7 amid growing cluster infections.

The government is grappling with a growing shortage of hospital beds reserved for seriously ill patients, as well as medical workers and equipment.

The bed occupancy rate in intensive care units for COVID-19 patients stood at 90.6 percent in Seoul as of 5 p.m. Saturday, and the figure for the country as a whole came to 80.9 percent.

The number of patients waiting to be admitted to hospital came to 1,739, the health ministry said. 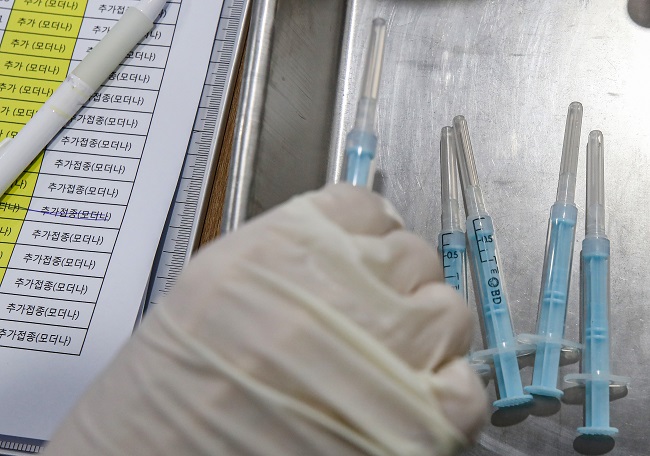 A medical worker checks syringes to be used for booster shots against COVID-19 at a medical center in Seoul on Dec. 10, 2021. (Yonhap)

The greater Seoul area accounted for 74.7 percent of the total caseload reported on Sunday, with Seoul having 2,520 new cases.

Starting Sunday, the government cut the dosage interval between primary vaccination and booster shots to three months from the previous 4-5 months to stem the spread of the virus and better protect senior citizens and other vulnerable groups.

A total of 42.96 million people, or 83.7 percent of the country’s population, have received their first shots of COVID-19 vaccines as of Sunday, and 41.69 million people, or 81.2 percent, have been fully vaccinated, with 12.4 percent having gotten their booster shots, the KDCA said.

The government also plans to begin running visiting vaccination services at schools on Monday to have more adolescents get inoculated.

The so-called vaccine pass system will be applied to more business facilities, including restaurants, cafes, cram schools and internet cafes, starting on Monday after a weeklong grade period.

Only fully vaccinated individuals or those with a negative COVID-19 test result can visit those facilities, and any violation will lead to fines for both users or facility owners.

It is part of the government’s stricter social distancing rules, which began to be enforced last week in the wake of a drastic surge in the infections following the easing of antivirus restrictions under the “living with COVID-19″ scheme.

Under the stricter rules to be in place until Jan. 2, private gatherings are limited to six people in the greater Seoul area and eight in the rest of the country.

On Sunday, the country added 28 imported cases, raising the caseload to 16,070, the KDCA said.