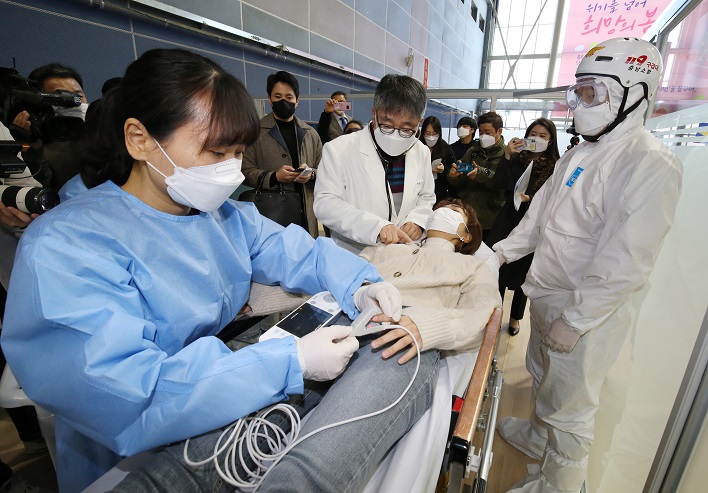 Medical workers conduct training to treat a person showing adverse reactions to a vaccine at a vaccination center in Cheonan, 92 kilometers south of Seoul, in this photo provided by the joint press corps on March 17, 2021.

SEOUL, March 17 (Korea Bizwire) – South Korea’s daily new coronavirus cases bounced back to over 400 Wednesday on increased virus tests and a continued rise in cluster infections, stoking woes over a resurgence down the road.

The daily caseload was sharply up from 363 on Tuesday. During the first two days of this week, the daily virus cases stayed in the 300s on account of fewer tests over the weekend.

In order to sharply flatten the virus curve, health authorities plan to enhance infection prevention measures at public facilities in the greater Seoul area, home to more than half of the country’s 52 million population.

The authorities will check 11,873 public facilities, such as manufacturing facilities that hire foreign workers, public baths and national parks, in greater Seoul till March 28.

As of 9 p.m. Wednesday, health authorities and local governments reported 370 more COVID-19 cases, which was 48 fewer than at the same time on Tuesday.

Daily new cases are counted until midnight and then announced the following morning.

Under the country’s vaccination program starting on Feb. 26, a total of 12 million people will be vaccinated for the April-June period. Foreigners also will be inoculated under the program. 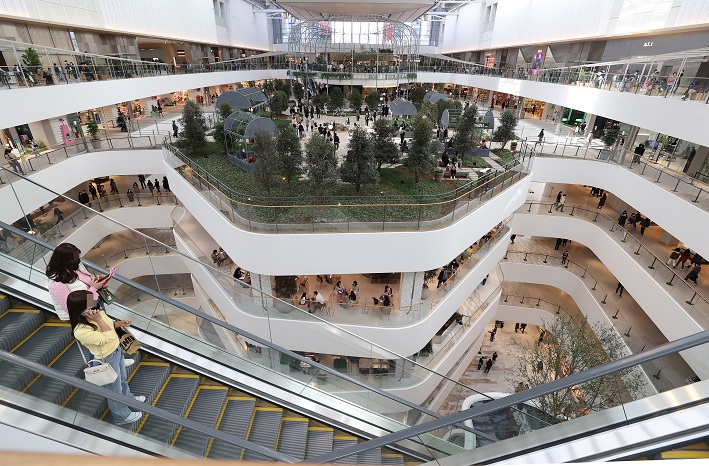 Two shoppers (L) stand on an escalator in a department store in Seoul that was included on the list of facilities to be closely monitored till the end of the month on March 16, 2021. (Yonhap)

A total of 9,003 cases of side effects after vaccinations have been reported, though 8,898 of them were mild symptoms.

A total of 16 deaths after vaccinations have been reported so far, according to the KCDA. But the agency said there was no causal relationship between the 14 deaths and the vaccinations.

Despite reported side effects of AstraZeneca’s vaccine in Europe, health authorities said that the rollout of the AstraZeneca COVID-19 vaccine will continue as there is no evidence suggesting correlation between vaccines manufactured by British-Swedish pharmaceutical giant AstraZeneca and Oxford University and reports of blood clots in some recipients.

The European Medicines Agency (EMA), European Union’s medicine regulator, is set to announce its review on the reported cases later this week.

The KDCA said that one suspected case of death from blood clots after a person received an injection of the AstraZeneca vaccine has been reported, but the death is highly likely to be caused by other underlying diseases.

One person who died within days of receiving the AstraZeneca vaccine is confirmed to have had blood clots, according to the KDCA.

The reported case involves a woman in her 60s, who had previously been admitted to a long-term care facility.

Of the 452 locally transmitted cases announced early Wednesday, 120 came from Seoul and 182 were reported from Gyeonggi Province that surrounds the capital. Incheon, 40 km west of Seoul, reported 21 more cases.

The number of imported cases came to 17, down from 18 the previous day. They included five from Hungary and three from Indonesia.

The country added eight more deaths, raising the total to 1,686. The number of patients with serious symptoms across the country reached 100, down from 103 the previous day.

The total number of people released from quarantine after making full recoveries moved up 559 to 88,814.