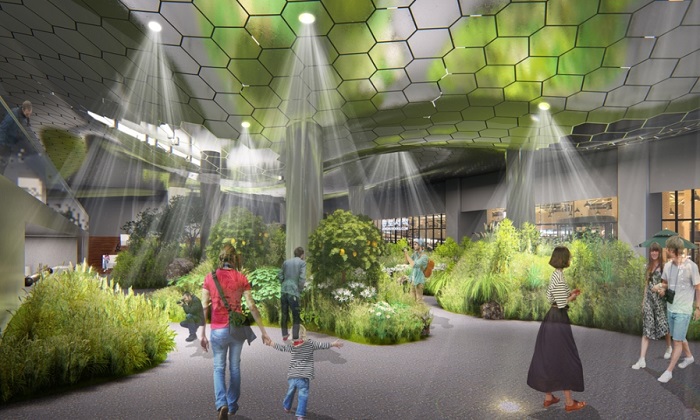 Citizens will be able to look through transparent columns to see how concentrated sunlight is transmitted underground. (image: Seoul Metropolitan Government)

The underground garden will be located in a vacant space that connects Jongro Tower and Jonggak Station on subway line 1.

The project’s core facility is a ‘sunlight lighting system’, which transmits sunlight from above the surface to the subway station below, creating an underground environment where various plants can grow.

Through eight lighting systems on the ceiling, natural light is drawn into the ground, creating a cave-like environment.

The so-called ‘sunlight lighting system’ is a remote lighting system that uses two non-spherical mirrors to concentrate sunlight at high density and then to transmit it over long distances through specially designed lenses.

Citizens will be able to look through transparent columns to see how concentrated sunlight is transmitted underground. At night, built in LED lights will serve as landscape lamps.

At night or under weather conditions such as rain, the system will automatically switch to LED light to achieve a certain level of lighting to maintain plant health.

The city plans to create a ‘little botanical garden in the city’ by planting greenery such as lemon trees and orange trees to create a garden for all four seasons.

In between the gardens, variable space will be created to accommodate activities such as education and experiences, performances, gatherings and healing programs like yoga and meditation.

Stairs located at both ends of the underground space will be converted for citizens to sit down and relax.