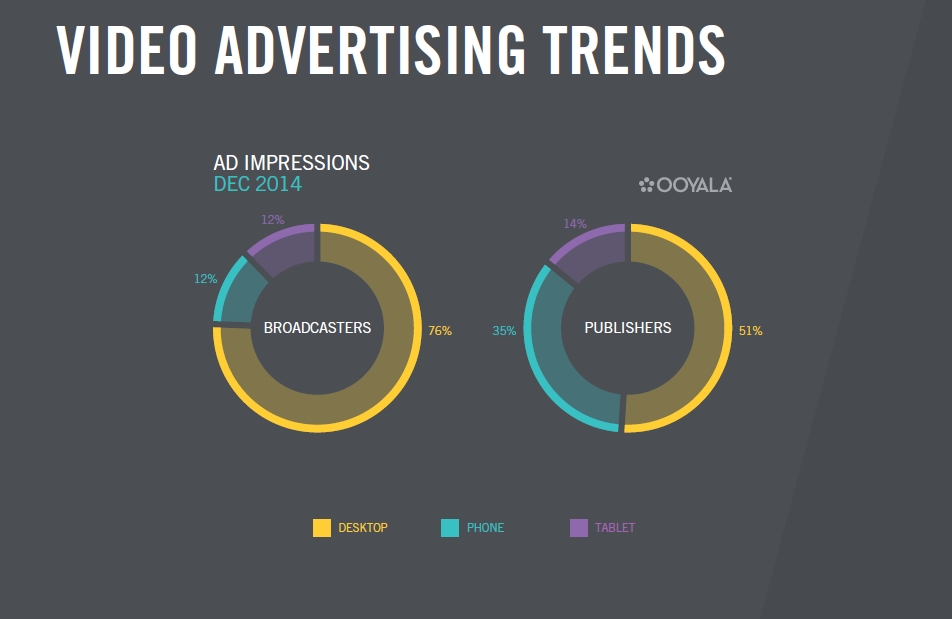 “This trend is indicative of the huge opportunity broadcasters and publishers now have to personalize experiences for mobile-minded audiences, including both content watched and ads delivered,” says Jay Fulcher, chief executive officer of Ooyala. “As phone screens continue to grow and data and pricing plan strategies are optimized to encourage better on-the-go video experiences, companies with strong mobile-first strategies will be the best positioned to maximize their reach and their revenues.”

Broadcaster vs. Publisher: Mobile Ad Impressions
As mobile becomes a primary form of video consumption, ad impressions are starting to follow suit. European market data included in this report from Videoplaza, an Ooyala company and leading ad-serving platform, shows that for broadcasters and publishers, next to desktops, mobile saw the highest percentage of video ad impressions as compared to all other devices.

Specifically, in December 2014, 35 percent of all online ad impressions for European publishers came from mobile devices, more than doubling the share of tablets at 14 percent, and within reach of desktops at 51 percent. On the other hand, broadcasters saw 12 percent of their ad impressions come from both mobile and tablets, with PCs taking the majority share amount at 76 percent. It comes down to content. Publishers’ content can run the spectrum of short to long-form video, conducive to mobile and tablet consumption while broadcasters primarily deliver long-form content.

Ad-Load Opportunity: Viewership Behavior Across Device Segments
With this increase of mobile ad impressions, the report highlights opportunities for content providers to increase ad loads across devices, particularly as mobile and tablets increasingly become the go-to devices for long-form content, content longer than 10 minutes in length.

In Q4 2014, tablet viewers had the highest engagement of any other device, spending 70 percent of their time with long-form content. Mobile viewers are splitting their time nearly evenly between short-form and long-form content, 54 percent and 46 percent respectively. The growth of long-form consumption on smaller screens has been a constant over the three years this report has been published. Content providers should consider increasing mid-roll ad placements across all of their content as viewers demonstrate stronger engagement on these devices.

About Ooyala
Ooyala, a subsidiary of Telstra Corporation Limited, delivers personalized video experiences across all screens and is a leader in online video management, publishing, analytics and monetization. Ooyala’s integrated suite of technologies and services gives content owners the power to expand audiences through deep insights that drive increased viewer engagement and revenue from video. Through its acquisition of London-based Videoplaza, Ooyala also operates one of the world’s largest premium video ad serving platforms and programmatic trading solutions, delivering ads to viewers across all devices. It is used by the most successful broadcasters and media companies in Europe and the Asia Pacific region to maximize video monetization.