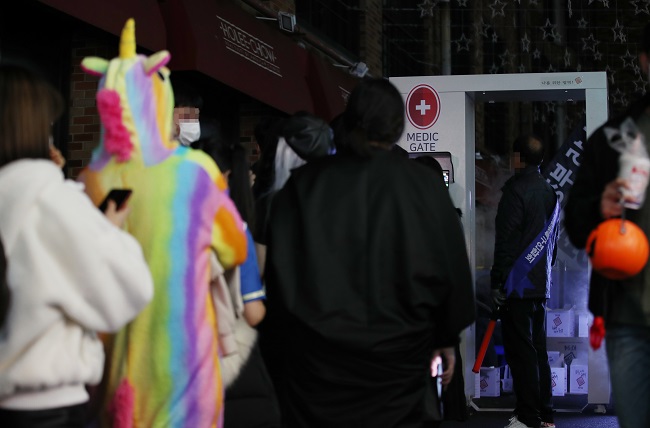 SEOUL, Nov. 1 (Korea Bizwire) — South Korea’s new coronavirus cases stayed in triple digits for the fifth straight day on Sunday amid concerns that new infections could spike in the wake of Halloween celebrations held in the middle of eased social distancing steps.

The country added 124 more COVID-19 cases, including 101 local infections, as cluster infections in greater Seoul rose at a rapid clip, according to the Korea Disease Control and Prevention Agency (KDCA). The total caseload rose to 26,635.

The figure marked the fifth triple-digit rise after 103 new cases reported on Wednesday, 125 on Thursday, 114 on Friday and 127 on Saturday.

Since the country eased its three-tier social distancing measures by one notch to the lowest level on Oct. 12, the daily figures have shown ups and downs, hovering around 100.

The latest growth came mostly from senior nursing homes, hospitals and other facilities, but sporadic community infections have been on the rise at small gatherings including family meetings across the country.

Halloween, which fell on Saturday, is a major concern for health officials as young people gathered in the popular areas of Hongdae, Itaewon and Gangnam in Seoul.

The country’s peak season for autumn foliage trips has been cited as another concern for a rise in local infections.

As the pandemic is prolonged, health authorities said they will expand social distancing steps to five tiers from the current three to effectively cope with the spread of the pandemic.

Prime Minister Chung Sye-kyun said during a government COVID-19 meeting that the new five-tier regulations will help efforts to stop the spread of the coronavirus.

The revision came four months after the government made public the three-tier social distancing steps on June 28.

Under the new regulations, facilities will be grouped into “priority” and “regular” sites in terms of the application of antivirus rules, while mask wearing and other key rules that were mandatory only at high-risk facilities will now apply to all facilities, Chung said.

At a press briefing held after the announcement, Health Minister Park Neung-hoo said the government made the new regulations to brace for the prolonged virus fight.

Experts expect the pandemic to continue at least till the first half of next year or the end of next year, he said.

The new scheme will take effect from next Saturday, Park added.

By region, 45 new virus cases were reported in Seoul, 36 cases in Gyeonggi Province that surrounds the capital and three cases in Incheon, west of Seoul. 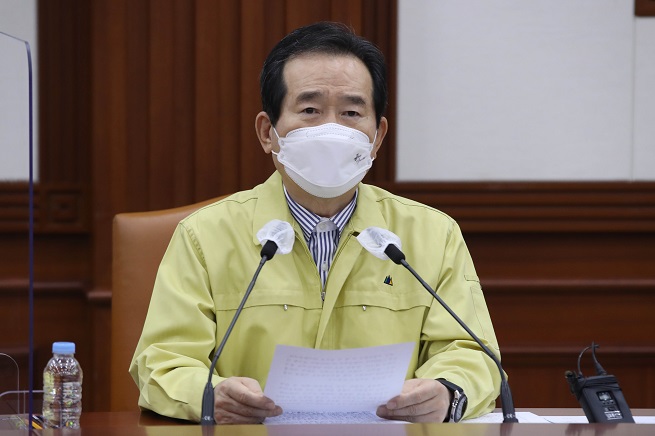 In Seoul, confirmed cases from a high school stood at 16 after the first case was reported last Thursday.

A nursing home in Dongdaemun Ward reported two additional cases, bringing the total number of its confirmed cases to 10.

Six additional cases were reported at a hospital in Songpa Ward, increasing its confirmed cases to 15.

A sauna in Gangnam Ward added three new cases to raise the number of its confirmed cases to 36.

Nine additional cases were reported at a middle school, with its confirmed cases reaching 34.

At a rehabilitation center in Yeoju, Gyeonggi Province, three additional cases were found, increasing the number of its confirmed cases to 41.

A nursing home in Gunpo, Gyeonggi Province, had nine additional patients to bring the number of confirmed cases to 57.

The number of seriously or critically ill COVID-19 patients came to 51 as of midnight, up from 54 the previous day.

As of 6 p.m., South Korea reported two additional deaths of COVID-19 patients since midnight Saturday, raising the death toll to 468.

The total number of people released from quarantine after making full recoveries came to 24,357, up 46 from the previous day.