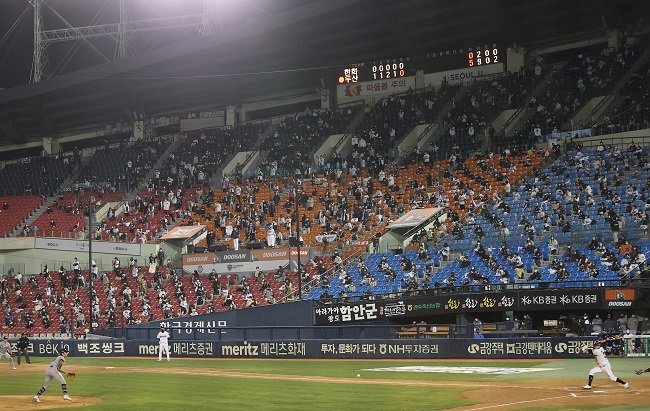 Fans attend a Korea Baseball Organization regular season game between the Hanwha Eagles and the Doosan Bears at Jamsil Stadium in Seoul on Oct. 13, 2020. The government eased social distancing rules over the coronavirus, allowing sports leagues to admit crowds of up to 30 percent of stadium capacities. (Yonhap)

The country added 84 more COVID-19 cases, including 53 local infections, raising the total caseload to 24,889, according to the Korea Disease Control and Prevention Agency (KDCA). It marked a fall from 102 cases reported on Tuesday.

The number of daily new local infections also went down from 69 a day earlier.

However, more than 50 patients and workers at a nursing hospital in Busan were later diagnosed with COVID-19, which were not yet reflected in the official tally released earlier in the day.

The authorities said 43 patients of the Busan nursing hospital and its nine staff members tested positive for the new coronavirus. One of the infected patients has already died, they added.

The authorities said four other people from the same room as the deceased have died with similar symptoms.

The mass virus infections came to light after an assistant nurse in her 50s was confirmed to be infected Tuesday, prompting the authorities to conduct coronavirus tests on all 262 patients and workers.

The health authorities also said they plan to conduct COVID-19 tests on all patients and people working at nursing facilities and mental institutions in the greater Seoul area.

The number of those undergoing tests is expected to reach around 160,000, the KDCA said, adding that tests could possibly expand into other parts of the country later.

Health authorities hinted the daily tally for Thursday could possibly spike due to the Busan cluster case.

On Monday, South Korea eased most of its strict restrictions on daily activities as there have been no massive outbreaks following the Chuseok holiday, the Korean equivalent of Thanksgiving, and a separate three-day break to celebrate the proclamation of the Korean alphabet.

South Korea suffered a major uptick in virus cases in mid-August, mostly traced to a conservative church in northern Seoul.

Health authorities said they believe the aftermath of the two major holidays is not that big.

Yet, a total of 20 schools across the country were closed Wednesday after two more students were newly confirmed with the COVID-19 virus, the KDCA said.

Despite some ups and downs, the daily new infections mostly stayed around 100 afterwards.

Under eased social distancing, high-risk facilities, such as clubs, karaoke rooms, bars and buffet restaurants, including those in the greater Seoul area, are now allowed to operate normally.

They are, however, obligated to follow infection prevention measures, including having visitors wear masks and keeping entry logs.

Sports events are also obligated to keep the ceiling on fans to 30 percent at stadiums, the KDCA said.

The authorities said they are mulling expanding attendance to 50 percent of stadium capacity at professional sports matches starting in November.

Starting earlier in the day, people are required to wear protective masks on public transportation and at medical facilities and rallies. Violators can be fined starting in November after a month of grace period. 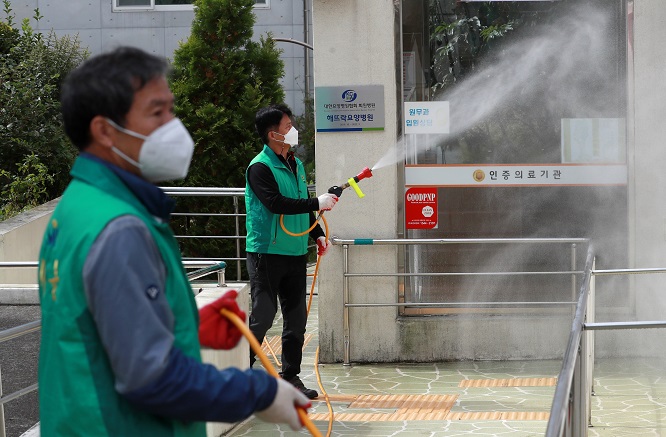 Of the newly identified local infections, 23 cases were reported in Seoul and 15 cases in Gyeonggi Province that surrounds the capital, the KDCA said. Incheon, just west of Seoul, also reported eight new cases.

The number of cases linked to a door-to-door sales event in Songpa Ward, southeastern Seoul, reached seven with six more patients being reported, the authorities said.

A nursing hospital in Uijeongbu, north of Seoul, reported one additional case, increasing the total related caseload to 61, the KDCA said.

Untraceable cases accounted for 17.5 percent of the total cases reported over the past two weeks.

Daily new imported cases reached 31, down from 33 a day earlier, the KDCA said. Yet the number stayed above the 30-mark for the second day in a row.

Of them, 14 were confirmed at quarantine checkpoints, such as airports and ports, the KDCA said. Twenty-nine of them are foreigners, and two are South Korean nationals.

The United States accounted for 13 cases, and there were also patients from the Philippines with five and Japan with three, it said.

The number of patients in serious or critical condition came to 85, down six from the previous day.

The total number of people released from quarantine after making full recoveries stood at 23,030, up 167 from the previous day.