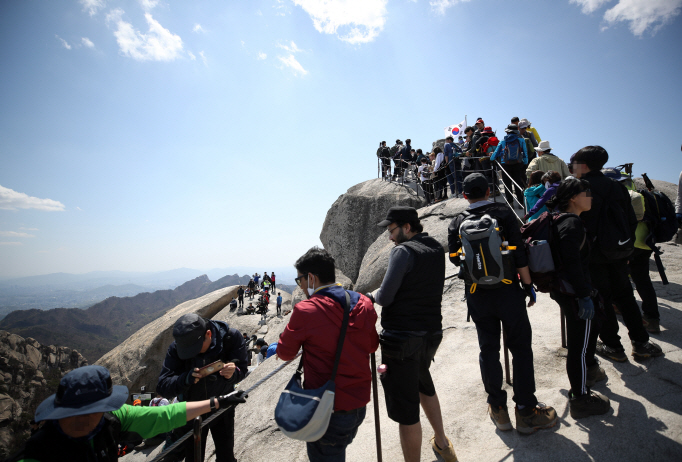 The Baekwundae peak on Mount Bukhan in Seoul is crowded with hikers on April 26, 2020, the first Sunday since the government eased its social distancing rules amid a slowdown in new coronavirus cases. (Yonhap)

SEOUL, Feb. 25 (Korea Bizwire) — Hiking accidents are on the rise as an increasing number of young people are visiting nearby mountains as an alternative to indoor exercise following the onset of the coronavirus outbreak.

During the Lunar New Year holidays, a series of mountain accidents involved hikers tripping or falling.

On February 13, a 60-year old man fell off a rock on Mount Bukhan in northern Seoul, fracturing his ankle.

A rescue team at the mountain performed emergency medical treatment on site, before escorting the man via helicopter to a nearby airfield.

Later that same day, another 60-year old hurt his ankle after falling on a different hiking trail.

Seoul’s Mountain Rescue Team has 28 members. They climb mountains four or five times a day to rescue hikers, whose numbers surged after the coronavirus broke out.

Climbing mountains has become a new ‘dating spot’ for young couples, with many of them getting lost while looking for ‘quieter places’.

Seoul’s 119 Special Rescue Service reported that 33 percent of all distress calls among those in their 20s involved getting lost in the mountains.