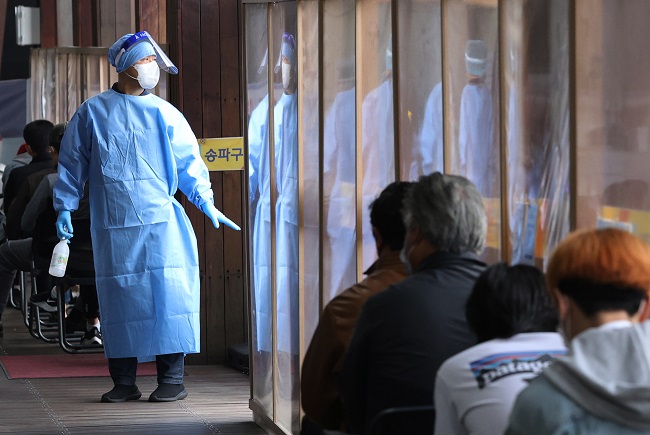 A health official works at a COVID-19 testing station in Seoul’s eastern district of Songpa on Oct. 15, 2021. (Yonhap)

SEOUL, Oct. 18 (Korea Bizwire) — South Korea’s daily coronavirus cases dropped to the lowest level in more than three months Monday as the country eased restrictions on private gatherings ahead of preparations for a gradual shift to the “living with COVID-19″ scheme.

Monday’s tally is the lowest daily number since July 7, when the country reported 1,211 additional virus cases on the onset of the fourth wave of the pandemic. The daily cases have since stayed in the quadruple digits, including the record high of 3,273 on Sept. 25.

As of 9 p.m. Monday, health authorities and local governments had reported 1,039 COVID-19 cases, up by one case from the same time Sunday.

The decline in virus cases came as the authorities eased restrictions for private gatherings and allowed longer business hours for cafes, diners and other multiuse facilities, ahead of the planned policy shift aimed at returning to normal life while treating COVID-19 like a seasonal infectious disease, such as influenza.

The eased restrictions on private gatherings raises the cap of the size of the gathering to up to eight people, up from the current cap of six, in the greater Seoul area after 6 p.m., if four of them are fully vaccinated.

“The overall scale of the epidemic is maintaining a stable decreasing trend. It’s becoming clear that the epidemic is not getting bigger but gradually diminishing,” Sohn Young-rae, a senior health official, said at a briefing.

Considering that the indicators on people’s movements or contact still remain high, the sluggish or decreasing spread of the virus suggests that the effect of preventing transmission appears to be kicking in on the back of the rising full vaccination rate, Sohn added.

Prime Minister Kim Boo-kyum said last week that the easing of private gathering rules will be “the last adjustment” in social distancing before implementing the scheme for a gradual return to normalcy, set to start in early November. 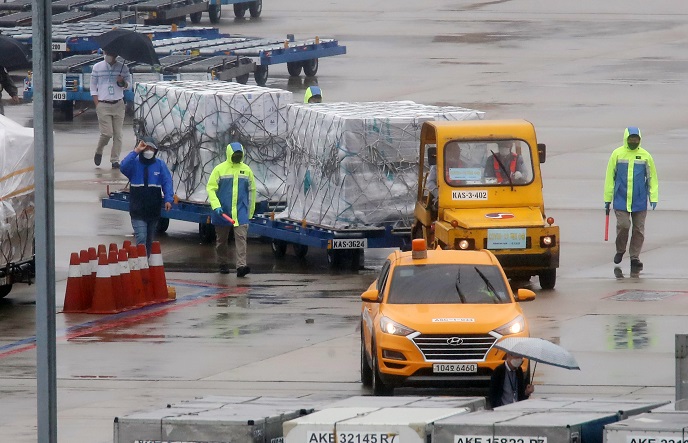 Workers move boxes carrying 442,000 doses of Pfizer Inc.’s COVID-19 vaccine, which the government secured under a direct contract with the pharmaceutical giant, from a chartered plane at Incheon International Airport, west of Seoul, on Oct. 6, 2021. (Yonhap)

The steady rise in the national vaccination rate is expected to give a boost to the transition efforts. As of Monday, 64.6 percent of the 52 million population were fully vaccinated and 78.7 percent had received their first shot.

Vaccinations for pregnant women and adolescents aged 16 and 17, which amount to about 899,000 people, also started this week. Vaccine bookings for those aged between 12 and 15 are due to begin late Monday.

Health authorities also said adolescents aged 12 to 17 will be allowed to be inoculated with leftover Pfizer shots starting Monday.

The KDCA advised pregnant women with underlying diseases or those in their first 12 weeks of pregnancy to consult with their doctors before receiving the shots.

Health authorities noted that the “need and benefit” of vaccination for pregnant women are high as they are at “high risk of COVID-19 infection.”

The KDCA also said 1.08 million doses of Pfizer vaccines are set to arrive at Incheon International Airport later in the afternoon.

The latest batch is part of 66 million doses to be supplied under a direct contract that the Korean government signed with Pfizer.

Twenty cases came from overseas, with more than half of them from Asian countries excluding China, four from Europe and three from the Americas.

The number of patients released from quarantine after making full recoveries stood at 311,781, up 1,437 from the previous day, the KDCA said.