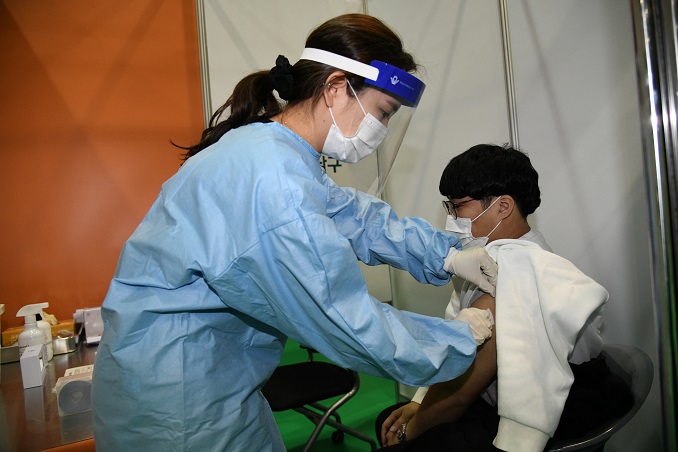 A citizen receives a COVID-19 vaccine shot in a mock vaccination training in the southwestern city of Gwangju on March 26, 2021, in this photo provided by a ward office in the city.

SEOUL, March 27 (Korea Bizwire) — South Korea’s daily new coronavirus cases rose to above 500 on Saturday to reach the highest number in more than a month, deepening concerns over a resurgence in infections particularly as more people go out in the warmer weather.

The country added five more deaths from COVID-19, increasing the total to 1,721.

Saturday’s caseload is the highest since Feb. 19 when the country reported 561 new patients.

The daily virus cases rose to 494 on Friday from 430 on Thursday and 428 on Wednesday after a brief fall to 346 on Tuesday. The daily caseload had stayed above 400 for six days in a row through Monday as cluster infections have continued across the country.

Local health authorities remained on heightened alert after several worrisome new outbreaks were reported across the nation Saturday, including one linked to a door-to-door water purifier sales business on Ganghwa Island in Incheon, west of Seoul, which has so far yielded 42 new patients.

The number of coronavirus patients linked to a welfare center for seniors in Busan, which reported four patients on Friday, also climbed to 24.

As there have been signs of a new spike in the virus cases, the government decided Friday to extend the current Level 2 social distancing rules in the densely populated greater Seoul area, the third highest in its five-tier system, and Level 1.5 for the rest of the country for another two weeks until April 11.

Gatherings of five or more people will continue to be banned, and restaurants and other public facilities in the greater Seoul area will be allowed to remain open until 10 p.m.

The authorities also designated the next five weeks starting Saturday as a “special virus prevention period” in response to the expected growth in spring travel.

“Despite all-out efforts, the number of new patients has been rising at a faster pace. There are more sources of concern in April, such as by-elections and major religious events for Easter, among other things,” Kim Hee-kyeum, a government official in charge of disaster management, said, asking citizens to fully comply with anti-virus measures during outdoor and religious activities. 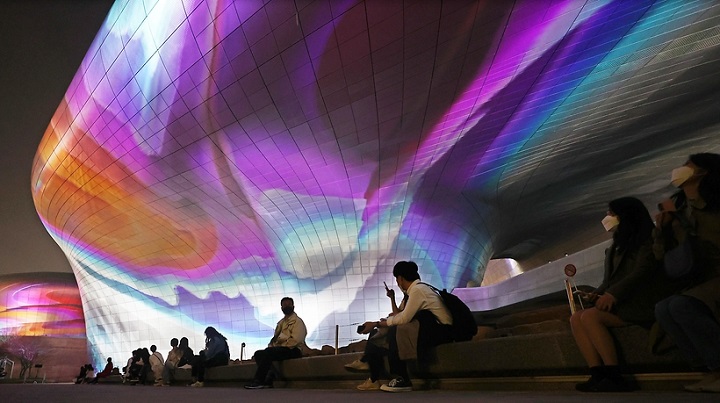 Health authorities are also continuing efforts to conduct the COVID-19 vaccine campaign without a hitch.

Since Feb. 26 when the country initiated its vaccination program, a total of 792,274 people have been given COVID-19 vaccine shots, including 22,845 on Friday.

A total of 57 individuals were found to have contracted the virus even after being vaccinated as of Friday, the KDCA said. Of them, 53 received AstraZeneca’s vaccine and four Pfizer’s.

Fifteen of them tested positive within seven days after getting a shot, and 27 people contracted the virus between eight and 14 days after being inoculated, and the remainder after two weeks.

Those in their 20s and 30s accounted for 52 percent of the post-vaccination cases, and 55 of them were either medical staff members or those working at medical facilities, it added.

They could have been infected before receiving the COVID-19 vaccine or before developing immunity, according to officials.

A total of 10,261 cases of side effects after vaccinations have been reported, including Friday’s 149. But most of them were mild, such as fever and nausea, the KDCA said.

Four new deaths after vaccinations were reported the previous day, bringing the total number to 21, it added.

The government has been encouraging citizens to get a shot, stressing its safety and effectiveness, and the vaccine campaign is expected to further gather pace.

AstraZeneca COVID-19 shots for citizens aged 65 and older began earlier this week, and Pfizer vaccines are to be administered to people aged 75 and older starting next week.

South Korea seeks to vaccinate 12 million people by June, and it aims to achieve herd immunity by November.

Cases tied to a church in North Chungcheong Province grew to 27 since the first patient was reported Thursday, and cluster infections have continued at restaurants, workplaces and other public facilities across the country, according to the authorities.

The number of imported cases came to 15, down from 23 the previous day. Cases from Asian countries, except for China, stood at 13, with cases from Africa at two.

The number of patients with serious symptoms across the country reached 103, down from 111 the previous day, the KDCA said.

The total number of people released from quarantine after making full recoveries moved up 845 to 93,475.