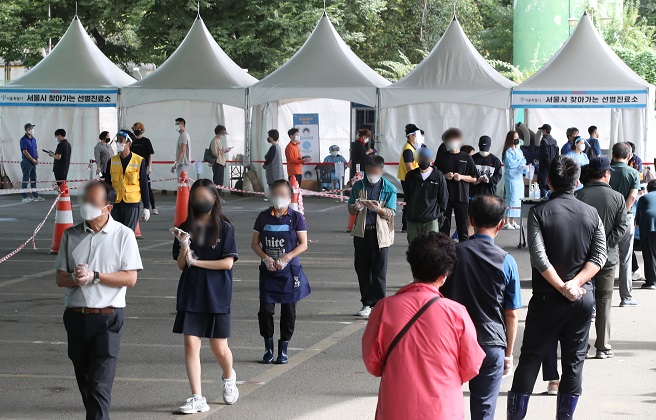 People wait in line to get tested for COVID-19 at a screening center in southeastern Seoul on Sept. 30, 2021. (Yonhap)

SEOUL, Sept. 30 (Korea Bizwire) — South Korea’s daily coronavirus cases remained in the 2,000s for the fifth day in a row Thursday in the aftermath of last week’s extended holiday that has fueled a nationwide resurgence in virus infections.

Health authorities will likely extend the current distancing rules, the toughest that have been in place for more than two months, for another couple of weeks.

The country reported 2,564 new COVID-19 cases, including 2,539 local infections, bringing the total caseload to 311,289, according to the Korea Disease Control and Prevention Agency (KDCA).

The country added seven more deaths from COVID-19, raising the death toll to 2,481.

Later in the day, health authorities and local governments said 2,302 new cases were confirmed from 12 a.m. to 9 p.m. Thursday, 58 more than at the same time on Wednesday. The daily tally is counted until midnight and announced the following day.

The daily caseload touched a fresh high of 3,271 on Saturday after masses traveled during the Chuseok holiday that celebrates the fall harvest and ran from Monday to Wednesday last week.

The aftermath of the Chuseok holiday has worsened the country’s fourth wave of the pandemic, with daily cases remaining over 1,000 for the last 86 days despite strengthened virus curbs to slow down the nationwide spread.

Health authorities have expressed concern about another surge in new cases as two extended weekends next month will likely lead to more travel and fuel even a greater spread of the virus.

They will decide whether to extend the current social distancing rules, which caps the number of people in private gatherings.

The greater Seoul area has been under Level 4 distancing measures, the highest in the country’s four-tier system, since July, while most other areas are under Level 3.

Authorities will announce their decision on the distancing rules Friday. 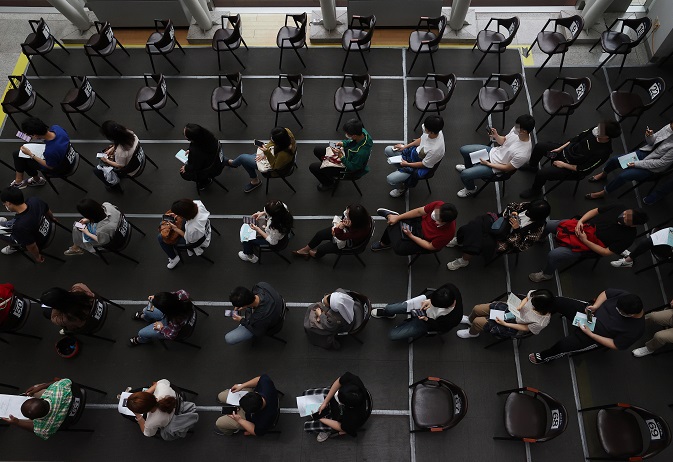 People are monitored for side effects after receiving their COVID-19 vaccinations at a vaccination center in northern Seoul on Sept. 30, 2021. (Yonhap)

Of the locally transmitted cases, the Seoul metropolitan area, home to half of the nation’s 52 million population and the nation’s virus hot bed in the latest wave, took up 77.5 percent of the total.

Areas outside of the capital region have also seen a rise in cases after the holiday.

Although the caseload is piling up, the country’s vaccination scheme has been on a steady rollout and is on pace to reach its goal of reaching herd immunity by November.

Health authorities said in a briefing they plan to open vaccinations without reservations to those who have yet to be inoculated beginning Oct. 18.

New cases from overseas arrivals, which include South Koreans, came to 25.

The number of patients with serious symptoms across the country reached 336, up five from the previous day.

The total number of people released from quarantine after making full recoveries was 274,205, up 1,481 from a day earlier.