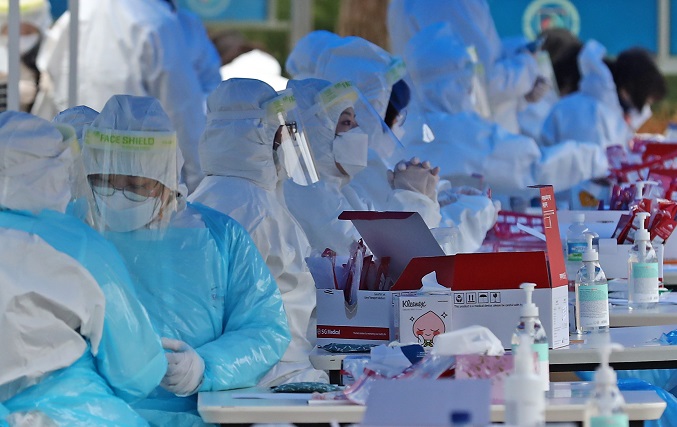 SEOUL, Nov. 20 (Korea Bizwire) — Health authorities on Friday urged people to refrain from gatherings and outdoor activities, as the country’s daily new coronavirus cases hovered above 300 for the third straight day and the greater Seoul area, home to half of the country’s population, is in the third wave of the outbreak.

The country added 363 more COVID-19 cases, including 320 local infections, raising the total caseload to 30,017, according to the Korea Disease Control and Prevention Agency (KDCA).

The daily caseload has stayed in the triple digits since Nov. 8, with the figure exceeding 300 for the first time since late August on Wednesday with 313 cases. The country confirmed 343 cases on Thursday.

To prevent another wave of virus infections, the country decided to enforce tightened virus prevention measures for two weeks from Thursday in the greater Seoul area and southern city of Gwangju by raising the social distancing level by one notch to Level 1.5 under a new five-tier scheme.

But due to the fast spread of the virus, health authorities said they could further elevate the social distancing level in the Seoul metropolitan area if the daily average number of virus cases in the region exceeds 200 in a one-week period.

The number of daily average virus cases in the capital region was 153 in the past seven days.

“We believe the third wave of the virus infections (in the wider Seoul area) is in progress after seeing such a situation in February-March and August,” Yoon Tae-ho, a senior health official, said at a briefing.

The city of Suncheon in South Jeolla Province, about 415 km southeast of Seoul, already started to enforce Level 2 social distancing rules from Friday as a precautionary move, becoming the first municipality in the country to enforce such an enhanced distancing scheme under the current five-level system.

Under the Level 2 scheme, gatherings involving 100 or more people are banned, while some virus-prone facilities need to suspend their businesses.

Health authorities said they will soon distribute guidelines on social distancing level adjustments to municipal governments, so that they can handle virus situations in their regions more effectively.

“The guidelines will cover the weekly number of virus patients and cluster infections in the region,” Yoon said.

“Raising the level will be effective to contain the virus, but since it can also affect the economy, they should reasonably assess risks and the virus situation.”

Health officials rampped up calls for citizens to strictly practice social-distancing and keep personal hygiene, amid a forecast that Saturday’s COVID-19 tally could be closer to the 400 mark.

According to the health authorities and provincial governments, South Korea recorded 299 new cases from the start of Friday to 6 p.m. During the time period, Seoul alone reported 140 additional cases.

Led by the Korea Society of Infectious Diseases, 11 local expert groups issued a joint statement warning that the daily tally of virus cases could spike to 1,000 in a few weeks without stringent preventive steps.

“Chances are high that the current COVID-19 situation would worsen further,” the statement read.

“It is forecast that should one to two weeks pass by without effective measures in place, the daily infection count could reach 1,000,” it added. 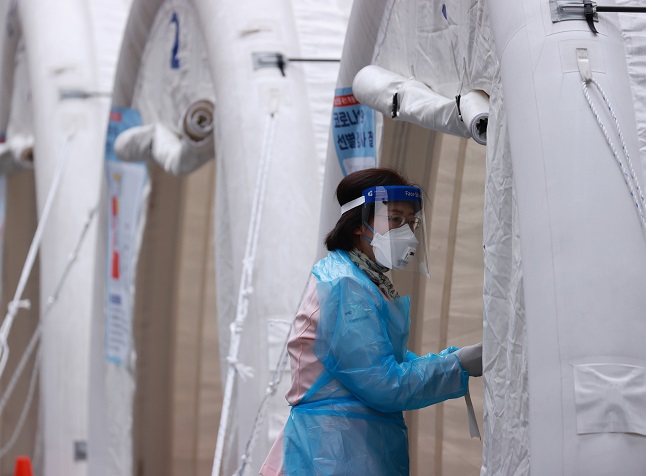 A health worker clad in protective gear prepares to work at a makeshift virus test clinic in Seoul on Nov. 20, 2020. (Yonhap)

Of the 320 locally transmitted cases, 218 were identified in the capital area, home to half of the country’s 51 million population.

The daily number of COVID-19 cases reported outside the greater Seoul area has been over 100 for the second straight day, with Gangwon Province adding 24 and South Gyeongsang Province confirming 18.

Among virus clusters, a university hospital in Gwangju added two more cases, bringing the total to 46, while a facility for disabled people in Cheorwon, Gangwon Province, reported 10 additional cases, raising its total to 40.

The number of cases connected to a family gathering in Incheon increased by 21 to 40. Infections tied to Yonsei University in Seoul reached 19 after the confirmation of seven more cases.

Fears of imported virus cases gripped the southeastern city of Busan, as over the last three days, a total of 77 virus cases have been reported from six foreign vessels that docked at a port in the city.

The number of new imported cases came to 43, slightly down from 50 on the previous day.

Of the newly confirmed imported cases, 17 were from Russia, followed by 10 from the United States. The total number of imported cases is now at 4,355.

The country reported three additional deaths from COVID-19, raising the total to 501. The fatality rate was 1.67 percent.

However, more deaths could be reported down the road as the number of seriously or critically ill COVID-19 patients came to 84, up five from Thursday.

Health authorities said the country has enough capacity to handle the virus patients in serious condition for the time being.

As of Thursday, a total of 112 hospital beds are available to accommodate critically ill virus patients, but health authorities plan to increase that number to 200 by the end of this year.

The total number of people released from quarantine after making full recoveries stood at 26,263, up 165 from the previous day, with 3,253 people isolated for COVID-19 treatment, up 195 from a day ago.