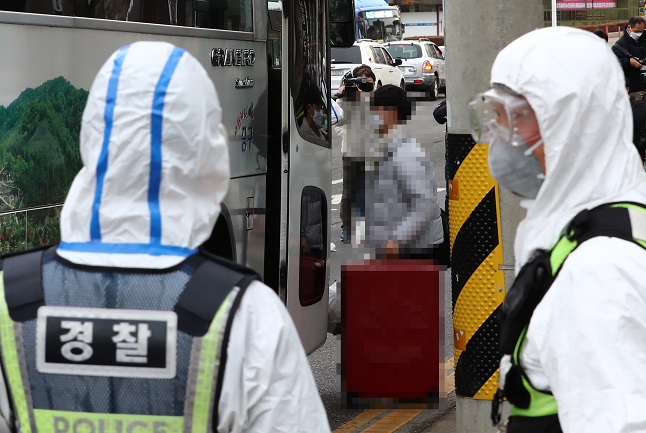 Virus patients tied to a religious educational facility in the central city of Daejeon, 164 kilometers south of Seoul, get on a bus on Jan. 25, 2021, to move to a treatment center, with police officers standing nearby. (Yonhap)

SEOUL, Jan. 25 (Korea Bizwire) — South Korea’s daily new coronavirus cases bounced back to over 400 again on Monday due to large-scale cluster infections linked to religious training facilities, as the country is set to decide whether to extend or lower its toughest-ever virus curbs later this week.

The country added 437 more COVID-19 cases, including 405 locally transmitted infections, raising the total caseload to 75,521, according to the Korea Disease Control and Prevention Agency (KDCA).

The figure was up from 392 on Sunday. Last week, the daily infections reached 392.6 on average.

The rebound came amid an ongoing cluster infection at a religious educational facility in the central city of Daejeon, 164 kilometers south of Seoul, where 125 cases have been reported as of noon Monday.

In a sign of chain infections, 37 students, as well as a pastor and his wife, from Hongcheon county in the eastern Gangwon Province contracted the virus after visiting the facility on Jan. 16, according to health authorities.

One other person is awaiting the result of a virus test.

In relation with a flurry of new cases in religious educational facilities, Prime Minister Chung Sye-kyun urged health authorities to take prompt and effective measures against virus outbreaks at such facilities.

Health authorities also said nine more cases of COVID-19 variants — four from Britain, three from South Africa and two from Brazil — were reported over the past week.

With the latest new COVID-19 strain cases, the number of the mutant virus cases reached 27 in the country.

In South Korea, the third wave of COVID-19 infections reached its peak on Dec. 25, with the daily new cases touching a record high of 1,241.

Later this week, health authorities plan to decide on the level of social distancing measures to be applied next week after monitoring the figure of new daily virus cases.

They have been operating the Level 2.5 social distancing scheme in the greater Seoul area, which is the second highest in the country’s five-tier scheme, and Level 2 rules in other areas. The steps are slated to be applied till Jan. 31.

Some restrictions on facilities, including cafes, gyms and other indoor sites, have been eased, but the ban on private gatherings of five or more people and the restriction on business operations after 9 p.m. have been extended till the end of this month. 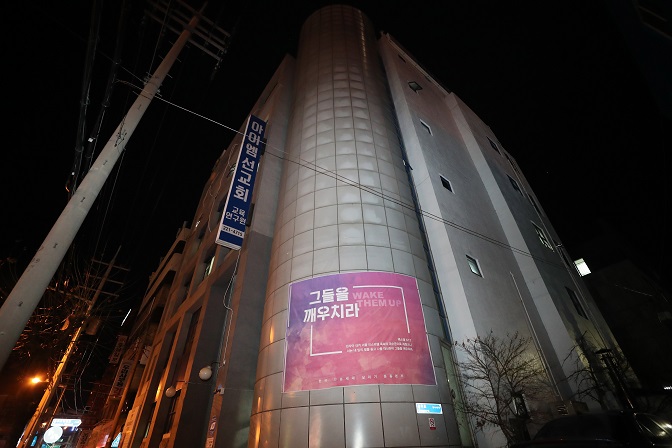 This photo taken Jan. 24, 2021, shows a religious educational facility in the central city of Daejeon, 164 kilometers south of Seoul, where 127 confirmed cases have been reported so far. (Yonhap)

Health Minister Kwon Deok-cheol said health authorities recognize the need to adjust the social distancing level as the daily number of new COVID-19 cases reached the 300 range, which would meet the criteria for Level 2.

“The current third wave of the pandemic appears to be on a declining trajectory,” Kwon told a press briefing.

But he said the government is reviewing whether to extend a ban on private gatherings of five or more people as people travel across the nation and gather during the Lunar New Year holiday set for Feb. 11-13.

The country set a special two-week quarantine period that will start on Feb. 1 on concerns that new infections could resurge after the holiday.

By region, 91 cases were reported in Seoul and 72 cases in Gyeonggi Province that surrounds the capital. Incheon, west of Seoul, reported 13 more cases. The three areas represent around half of the nation’s population.

Daejeon reported its largest-ever number of daily infections at 125 due to the cluster infection.

The number of imported cases came to 32, up from 23 the previous day. They included five from Indonesia and four from Russia.

South Korea added 11 more deaths, raising the total to 1,360. The number of patients with serious symptoms across the country reached 275, down from 282 on Saturday.

The total number of people released from quarantine after making full recoveries moved up 426 to 62,956.