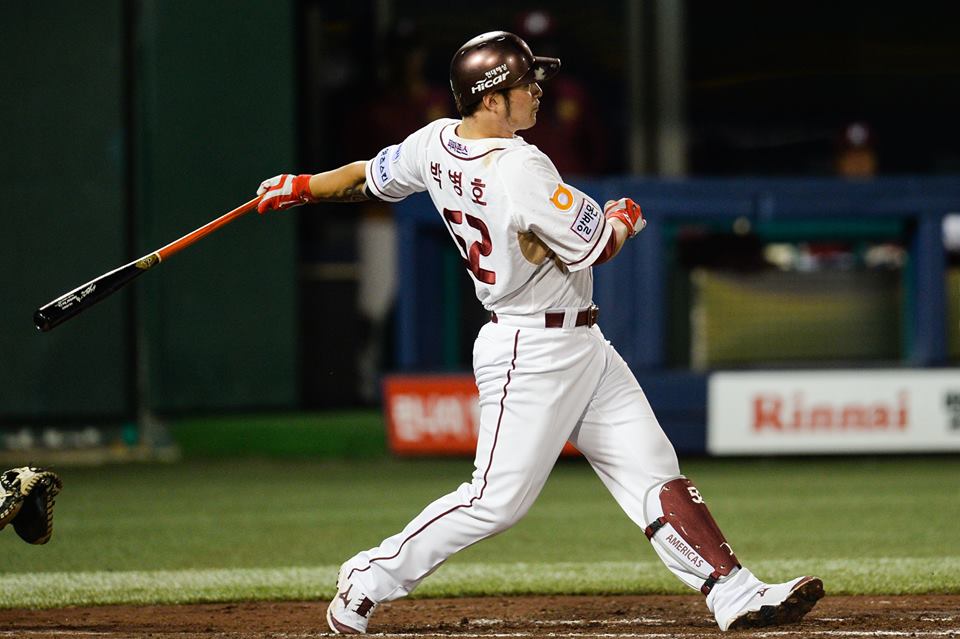 The Heroes reached the decision soon after the Korea Baseball Organization (KBO) notify them of the result of the silent auction among Major League Baseball (MLB) clubs, clearing the path for the 29-year-old first baseman to pursue a major league career.

Now that the Heroes have accepted the winning bid, the MLB’s Commissioner’s Office will disclose the bidding winner to the KBO. The Heroes said the identity of the big league club will be revealed Tuesday morning, at the earliest.

The MLB team with the highest bid will have the exclusive right to negotiate with Park for 30 days. Should the two sides reach a contract, then the Heroes will keep the posting fee for Park as compensation.

If Park fails to sign a contract within 30 days, he cannot be posted again until Nov. 1, 2016. He will then have a choice of entering contract talks with interested teams in Japan’s Nippon Professional Baseball (NPB) or return to the Heroes for at least one more season.’

The winning bid for Park is the second-highest for an Asian position player, behind $13.12 million submitted by the Seattle Mariners for outfielder Ichiro Suzuki in 2000.

Last December, Park’s former Nexen teammate, Kang Jung-ho, drew a bid of just over $5 million from the Pittsburgh Pirates. Kang later reached a four-year deal with the Bucs to become the first South Korean position player to jump from the KBO to the majors via posting.

Park is trying to follow in Kang’s footsteps, and the two share the same agency in the U.S.-based Octagon.

Park, currently in Japan with the national team ahead of the Premier 12 tournament, told reporters in Sapporo that he was “surprised” with the amount of the winning bid, saying, “It was more than what I’d expected.”

“I’d like to thank Nexen for accepting the bid,” Park said prior to the national team practice. “Now that I had the opportunity, I just wanted to brace myself for challenges ahead. But I wasn’t paying too much attention to the posting process because it was out of my control.”

Park added that he’d spoken with Kang earlier in the day, and said, “He wished me luck.”

Park has been one of South Korea’s most feared sluggers in the past several seasons.

While drawing attention of scouts from more than a dozen MLB clubs this year, Park set career-highs in Triple Crown categories with a .343 average, 53 home runs and 146 RBIs in 140 games. He also established personal-bests with a .714 slugging percentage, 181 hits, 129 runs scored and 35 doubles this year.

He is the first KBO player to lead the league in home runs and RBIs for four consecutive seasons and has increased his totals in both categories in each of those four years. Park has also been among the league leaders in walks, runs scored, on-base percentage and slugging percentage over that span.

Park made his KBO debut out of high school with the LG Twins in 2005 but didn’t become an everyday player until a midseason trade to the Heroes in 2011.

He blossomed into an All-Star slugger in 2012, leading the KBO with 31 home runs and 105 RBIs and winning his first MVP award.

Last year, Park became only the third KBO player with a 50-homer season, belting 52 long balls and driving in 124 runs while finishing second in the MVP voting.

This year, he became the first player in the South Korean league to post back-to-back 50-homer seasons. He’s been nominated for the MVP award again for 2015.

He has also been a durable player and has missed only four games since the start of the 2012 season — all of them coming this season.

Park got some reps at third base in spring training and the regular season, apparently to expand his options.