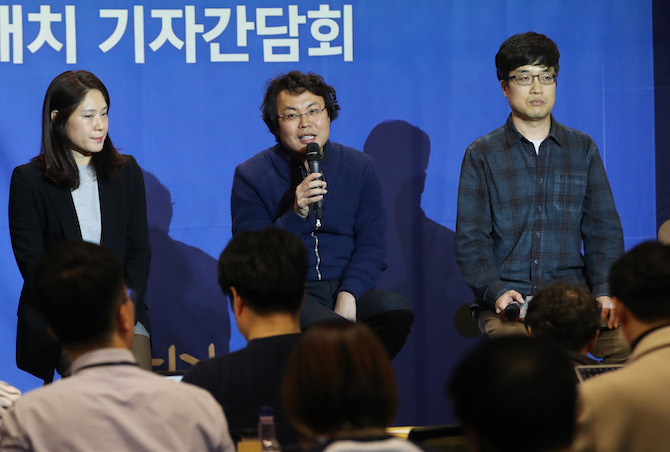 Park Geun-han, a senior R&D official of NHN Entertainment Corp., holds a press briefing on the fifth and final round of Go matches between its artificial intelligence program HanDol and global champion Shin Ji-seo at its headquarters in Pangyo, south of Seoul, on Jan. 23, 2019. (Image: Yonhap)

The entertainment unit of Naver, South Korea’s largest portal, unveiled the AI development plan as it was set to host the fifth and final round of Go games between its AI player HanDol and the reigning global champion Shin Jin-seo.

“We developed HanDol under the goal of making universal AI that can be easily used by the general public,” Park Geun-han, who is in charge of the firm’s R&D center, said in a media briefing at the company’s headquarters in Pangyo, south of Seoul.

In the early stage of development in 2018, HanDol had an 80 percent win rate against 9 dan players on Hangame, one of its online game sites.

Park said the HanDol project was inspired by the historic match between Google’s AlphaGo and Go master Lee Se-dol in March 2016.

Google’s AI program’s defeat of global champion Lee was seen as a symbolic point where computers became better than humans at Go, which had been considered more challenging for computers than chess.

NHN said HanDol has made progress and exceeds the 2016 version of AlphaGo, although it lags behind the latest version of Google’s AI.

If HanDol defeats Shin in the final match, it will have beaten the nation’s top five Go players. The result is expected to showcase NHN’s advanced AI technology.

Company officials said they have been developing Go and other board games based on AI to target a wide range of gamers, while looking into ways to use it in other services under its wing.

The company has a wide-ranging business portfolio with entertainment, cloud computing, commerce and fintech, with a goal of becoming a comprehensive IT solution company.