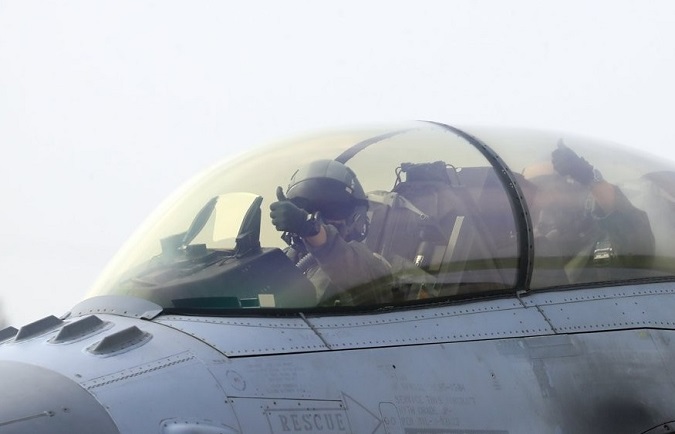 South Korean pilots aboard an F-16 fighter give the thumbs-up at an air base in the city of Cheongju, central South Korea, on Sept. 7, 2017, as the Air Force conducts a week-long air combat exercise to practice readiness against possible provocations from North Korea and counterattack operations. (Yonhap)

SEOUL, Oct. 12 (Korea Bizwire) — The number of Air Force pilots who applied for discharge this year turned out to be zero since their career shift to private airlines became almost impossible due to the COVID-19 pandemic.

According to the data that Rep. Kim Min-ki of the ruling Democratic Party received from the South Korean Air Force, the number of expert-level pilots who applied for discharge to get a job at a private airline next year was zero.

The number of expert-level pilots who applied for discharge last year to get a job at private airlines this year stood at seven. This figure was far lower than the 113 reported a year earlier.

The attrition of military pilots to private airlines has been regarded as one of the chronic problems facing the Korean Air Force as every year, about 100 to 130 expert-level pilots typically opt to work at private airlines after being discharged from military service.

Expert-level pilots are those with eight to 17 years of experience. After undergoing tactical training for a certain period of time, they can carry out independent tactical operations and act as flight instructors for novice level pilots.