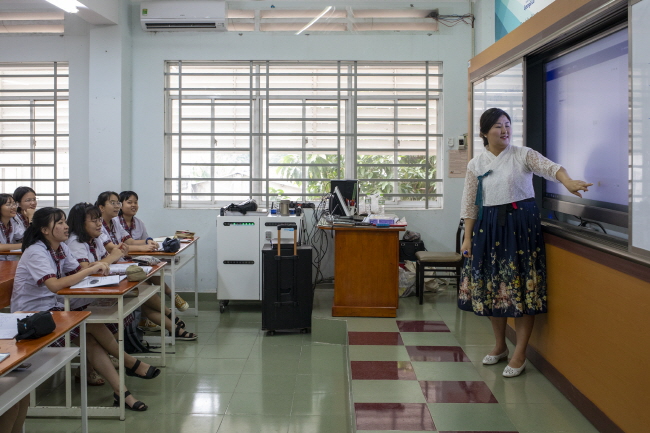 According to the Korean Language Education Center, 5,290 students currently study Korean in 12 universities in Ho Chi Minh City, a 25 percent increase from 4,724 in 2017.

The center, located in the Vietnamese city, is a subsidiary of the South Korean education ministry.

The Korean language fad is spilling over into middle and high schools as well.

Many secondary school students are learning Korean due to their interest in South Korea’s pop culture, including K-pop and dramas, while college students are doing so to enter South Korean companies, which pay salaries much higher than Vietnamese firms.

“Graduates who have specialized in the Korean language and undergone language training programs in South Korea have no worries over their job-seeking,” said a professor who leads the Korean language department of the Vietnam National University’s social sciences and humanities school.

The South Korean education ministry plans to have close consultations with its Vietnamese counterpart to find ways to make Korean a regular subject in Vietnamese middle and high schools.