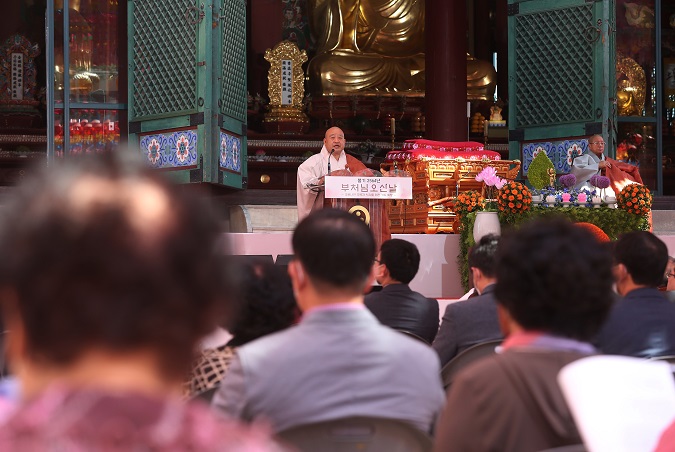 Ven. Wonhaeng, senior official of the Jogye Order of Korean Buddhism, speaks during a ceremony marking the Buddha’s birthday at the Jogye Temple in central Seoul on May 30, 2020. (Yonhap)

SEOUL, May 30 (Korea Bizwire) — South Koreans celebrated the Buddha’s birthday Saturday after a one-month delay caused by the new coronavirus outbreaks, with many praying for the Buddha’s wisdom to help weather the pandemic.

Congregants held celebrations at more than 20,000 temples across the nation to mark the Buddha’s 2,564th birthday after a monthlong session to pray for the world to quickly emerge from the COVID-19 scourge.

At the Jogye Temple, the headquarters of the Jogye Order of Korean Buddhism in central Seoul, some 1,000 people gathered, including religious leaders and top officials from the government, presidential office Cheong Wa Dae and political parties.

In a congratulatory message read out by the culture minister, President Moon Jae-in pointed out that the celebrations followed a one-month prayer session to overcome the COVID-19 crisis and recover from it.

“The world where the minds of mercy will bloom will open after you share with others the Buddhist merit and virtue that you have built through prayers,” Moon said.

Ven. Wonhaeng, senior official of the Jogye Order, expressed his appreciation to frontline health care workers, the government and citizens for their support in paving the way for the celebrations.

“The Buddha’s birthday ceremony is something that the entire nation has made possible. I thank all citizens,” he said. “I wish citizens and worshipers the Buddha’s mercy all the time.”

The number of participants at the ceremony in the Jogye Temple was much lower than 15,000 recorded last year due to the ongoing coronavirus pandemic.

Temple officials put in place strict anti-virus measures, such as fever checks and hand sanitization. But congregants were seen sanding close to each other, raising concerns about viral transmission among the crowds.