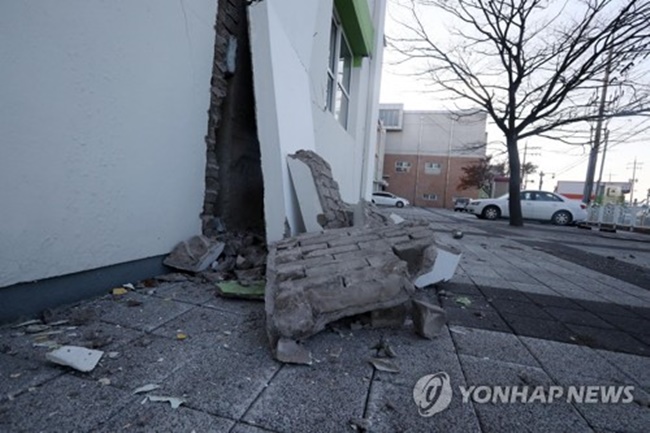 The outer wall of an elementary school in Pohang has fallen after a magnitude 5.5 earthquake hit the southeastern city on Nov. 15, 2017. (Image: Yonhap)

SEOUL, Nov. 15 (Korea Bizwire) – Nuclear reactors located on South Korea’s southeastern coast were not affected by a series of strong earthquakes that hit the nearby city of Pohang on Wednesday, the state nuclear operator said.

The first magnitude 5.5 quake hit north of Pohang, located 370 kilometers southeast of Seoul, at around 2:30 p.m. The area was hit by a second 5.4quake minutes later, the state weather agency said.

Korea Hydro & Nuclear Power (KHNP) said the six nuclear reactors in Gyeongju, about 45 kilometers south of the epicenter, as well as other reactors on the southeastern coast are all functioning normally.

“All reactors, including those in Gyeongju, are operating normally without power shutdown or decreased power output,” the KHNP said. “Although there is no breakdown in facilities or radiation leakage, we will conduct an in-depth inspection and release the result later.”

Nuclear reactors in the region operated normally when the nation’s strongest-ever earthquake at magnitude 5.8 hit Gyeongju in September 2016. At the time tremors were felt as far as Seoul.

Among 24 reactors in the nation, 18 are located along the southeastern coast, which is more exposed to tremors, as recent earthquakes in nearbyJapan could have destabilized the fault lines on the Korean Peninsula.

For Shin Kori units 5 and 6 under construction in the southeastern city of Ulsan, the KHNP said they will be built to be safe against a magnitude 7.4 quake.