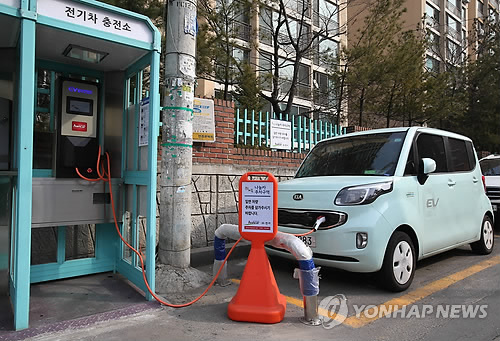 Han Car users can charge their vehicles at the phone booth-turned EV stations, and it takes six hours to fully charge a vehicle. (image: Yonhap)

KT Linkus, a KT subsidiary that is in charge of the management and maintenance of public phones, began a pilot project offering EV charging stations by transforming three phone booths in Seoul from February 3, together with the Seoul city government and Han Car, an EV sharing company.

Han Car users can charge their vehicles at the phone booth-turned EV stations, and it takes six hours to fully charge a vehicle. The EV stations are located at the Hyundai Apartment complex in Dangsan-dong, the Myeonmok-dong bus garage and the Ssangmoon 2-dong Post Office. KT Linkus plans to install additional EV stations after the pilot project.

An official at KT Linkus said, “By making use of the almost discarded phone booths, the project will benefit EV users by contributing to more convenient service.”