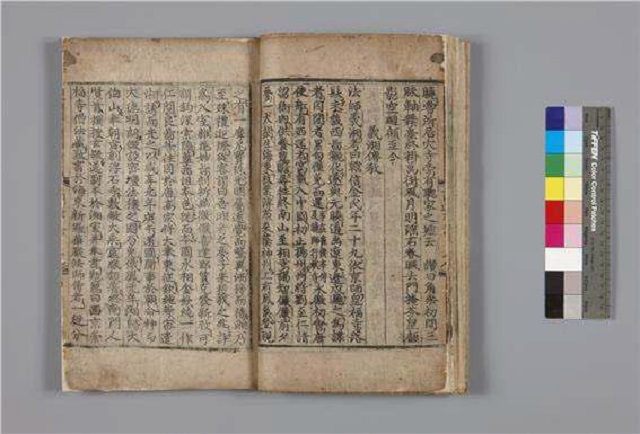 This photo provided by the Cultural Heritage Administration on Aug. 27, 2020, shows pages of the fourth and fifth volumes of “Samguk Yusa,” produced from the original 1394 wood engraving.

SEOUL, Aug. 27 (Korea Bizwire) — The oldest-known copy of “Samguk Yusa,” a book about the legends and history of Korea’s ancient Three Kingdoms (57 B,C.-A.D. 668), was newly added to the list of state-recognized national treasures, the Cultural Heritage Administration (CHA) said Thursday.

CHA said it registered the fourth and fifth volumes of Samguk Yusa, produced from the original 1394 wood engraving, as National Treasure No. 306-4, elevating it from its previous “treasure” status granted in 2002.

The two volumes, bound into a single book, is known as the oldest published version of Samguk Yusa, produced earlier than the three other national treasure-registered Samguk Yusa copies made from the same 1394 engraving.

It is referred to as the “Beomeo Temple” edition, as it has been in the possession of the Buddhist temple in Busan since 1907.

Despite missing three preceding volumes, the Beomeo Temple edition is deemed to have great historical and academic value as it carries several pages that are missing in the other copies, CHA explained.

The text was compiled in part by the Buddhist monk Iryeon (1206-1289) and is recognized as one of the two most important historical materials for studying ancient Korean history, along with “Samguk Sagi” (History of the Three Kingdoms) compiled by Kim Bu-sik in 1145.