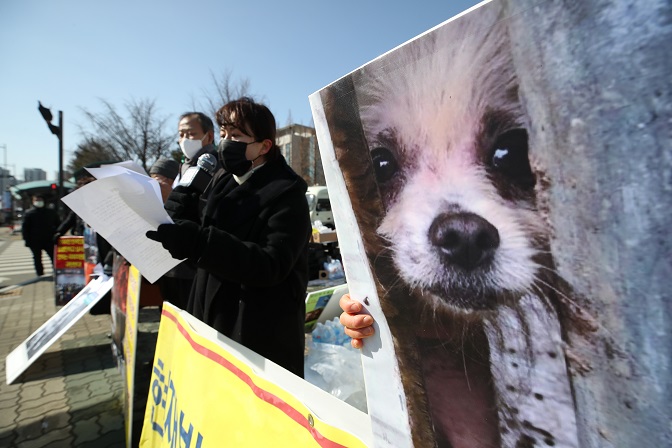 Members of a civic group, composed of pet lovers, stage a rally in front of the National Assembly, calling for legislation on banning the sale of dogs and cats for food, in this file photo dated Feb. 17, 2021. (Yonhap)

The president made the remarks while being briefed by the prime minister on the government’s plan to improve the system to take care of abandoned pets, she said.

The spokesperson provided no further details on Moon’s remarks in a brief press statement.

A growing number of South Koreans live with dogs at home, but there are dog farms still in operation, where some dog breeds are raised for food.

Moon is known as a dog lover, living with several dogs at the presidential compound.

Civic groups, meanwhile, were divided over Moon’s latest remarks, which sparked yet another round of debate over one of the most disputed issues in South Korea.

“A growing number of South Koreans are considering the consumption of dog meat as a matter of animal abuse rather than tradition,” said Jeon Jin-kyung, who heads the Korea Animal Rights Advocates, welcoming Moon’s statement.

Advocates of dog meat claimed that the people should also have freedom to choose what they eat.

“Dogs that are raised for consumption weigh from 35 kilograms to up to 80 kilograms. They are completely distinctive types of breeds raised in a different environment compared to pets,” said Cho Hwan-ro, who represents a local group of dog farmers.