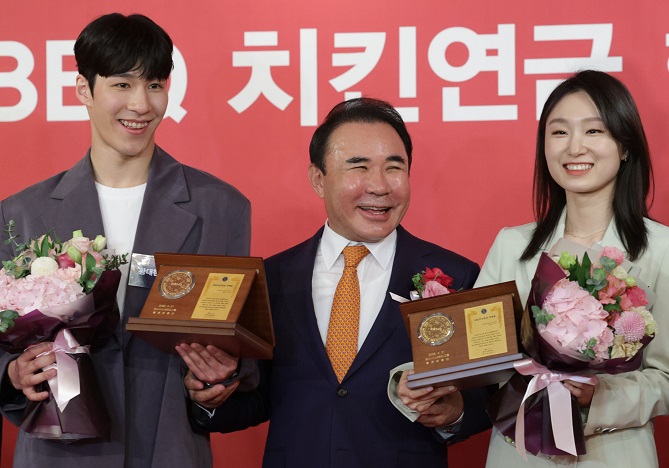 SEOUL, April 21 (Korea Bizwire) — Yoon Hong-geun, head of the South Korean delegation to the Beijing Winter Olympics in February and also president of the Korea Skating Union (KSU), had made a grand promise to athletes during the competition: Win a gold, and you will get free fried chicken for life.

If the man says he will give you free chicken, then he is definitely in a position to do just that.

And with fried chicken being so popular in South Korea and many of its athletes claiming to be fans of the poultry dish, there couldn’t have been a more enticing carrot.

Genesis BBQ and the KSU organized an award ceremony for short track speed skaters Choi Min-jeong and Hwang Dae-heon, South Korea’s only two gold medalists in Beijing, to celebrate their achievements and to present them with what the company dubbed “chicken pension.”

The company said it settled on 30,000 won considering prices of chicken, inflation and delivery fees, and added the amount will increase if the prices of BBQ chicken dishes go up. 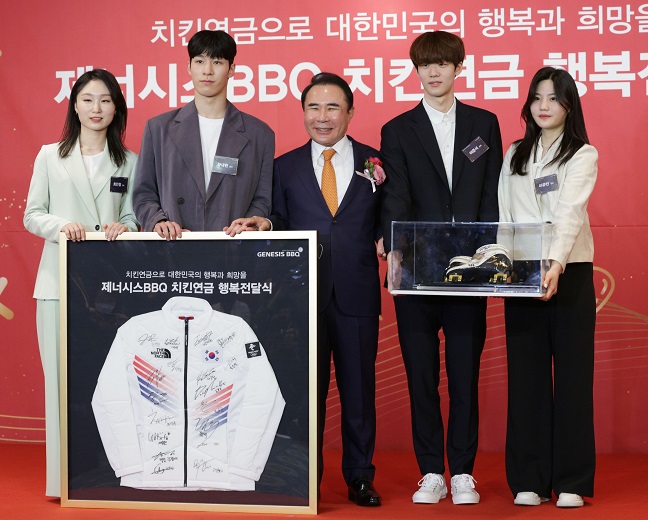 Yoon had made his pledge in the early days of the Olympics.

On Feb. 7, three days after the opening ceremony, Hwang had been involved in a bit of officiating controversy during the 1,000m semifinals, where he was penalized for what he and South Korean officials believed was a phantom call on illegal late passing.

The next day, Yoon asked Hwang what he, as the head of the athletic delegation, could do to cheer up the short track team. Hwang told Yoon that if the BBQ boss would offer him free chicken for the rest of his life, then that would push him to a gold medal.

Yoon agreed to do so on the spot. Then on Feb. 9, Hwang captured his 1,500m gold medal and said in his postrace interview that he’d been promised free chicken.

Choi won the first of her two silver medals two days later, and asked Yoon if she, too, could get free chicken. Yoon said he would consider it. Choi then made Yoon’s decision easier by grabbing gold in the 1,500m on Feb. 16.

“I was prepared to do whatever it took to lift the spirits of our athletes,” Yoon said during the ceremony Thursday. “I am glad it worked out well for everyone.”

Hwang thanked Yoon for coming through for him and his teammates, instead of dismissing Hwang’s request for free chicken as a joke.

“I never thought the whole thing would come to this point,” Hwang said with a smile. “At that time, we were all down on ourselves (after the judging controversy). I wanted to lighten the mood a bit, and Chairman Yoon helped us get back on our feet.”

Choi said she has been an object of envy for her family and friends for getting free chicken.

“I am always happy when I share delicious food with people that I love,” Choi said. “I am looking forward to sharing chicken with my family and teammates.”

Genesis BBQ said Thursday all the other Beijing medalists would receive free chicken, though not as long as the two gold medalists.

From non-skating sports, their respective national governing bodies will recommend one Olympian each, and five athletes in total will get the chicken coupon twice a week for one year.