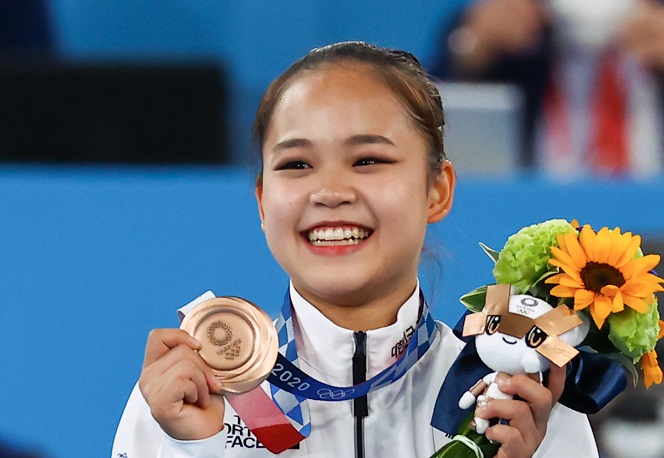 South Korean gymnast Yeo Seo-jeong poses with her bronze medal from the women’s vault event at the Tokyo Olympics at Ariake Gymnastics Centre in Tokyo on Aug. 1, 2021. (Yonhap)

TOKYO, Aug. 1 (Korea Bizwire) — South Korean artistic gymnast Yeo Seo-jeong can proudly call herself an Olympic medalist, but the 19-year-old vaulter isn’t even the first one in her family to claim that title.

It was a quarter century ago that her father, Yeo Hong-chul, captured silver medal in the men’s vault at the Atlanta Olympics.

Thanks to Seo-jeong’s bronze medal in the women’s vault at the Tokyo Olympics on Sunday, the Yeos are now the first father-daughter duo from South Korea to have won Olympic medals.

Rebeca Andrade of Brazil won the gold with 15.083 points and no one else averaged over 15 points.

Yeo’s chances of a gold medal looked promising for a moment, as her 15.333 points were the highest first-attempt points with three gymnasts remaining.

Yeo, the 2018 Asian Games gold medalist, is such an accomplished vaulter that she already has a namesake skill. And it’s a variation of one of her father’s eponymous skills, Yeo 2.

Her father performed his with a 900-degree twist at the end, and his daughter does hers with a 720-degree twist.

Seo-jeong had saved it for the final. She went with safer, less risky vaults in the qualification stage to ensure that she’d reach the final first.

The daughter Yeo’s namesake vault is the most challenging move in the women’s competition with a difficulty score of 6.200 points.

Vaulters are scored on their moves’ difficulty score and their execution, with deductions for mistakes during the routine.

Yeo earned 9.133 execution points for her powerful vault to position herself for a medal. Her second vault was an easier move with a 5.400 difficulty score, and she would need another high execution score to stay in the medal picture.

Yeo’s landing this time wasn’t as smooth as the first one. But the three gymnasts that followed couldn’t catch Yeo, who cried tears of joy when she clinched bronze.

“My first vault was so good that I started thinking too much about matching that with my second vault,” Yeo said. “That’s why I made mistakes. But I have no regrets (about not winning gold). I am satisfied with this result.”

Seo-jeong said she had been texting back and forth with her father since arriving in Tokyo, because she felt she needed a confidence boost.

“He sent some long texts, and told me I’ve been doing great the whole time and I should just stick to it,” she said.

The teenager spoke about trying to move out of her father’s shadow and admitted to feeling added pressure that comes with being the daughter of an Olympic medalist.

“Now, I’m going to work hard and try to beat him,” she said.

Her father was doing TV commentary work. When the final scoreboard showed his daughter had won bronze, Hong-chul took off his analyst hat and screamed and clapped for joy.

In that moment, he acted just like any other proud father would have.

The father said afterward he was nervous during the whole broadcast.

“I was hoping for gold,” he said. “When Seo-jeong made her mistake, I was praying she would at least get a bronze medal. I think this bronze medal will motivate her even more.”

When informed that he and Seo-jeong had made Korean Olympic history with their medals, he said, “I had no idea. It’s great. But I am happier that she’s the first female gymnast from Korea to win a medal.”

Asked what he wants to do for Seo-jeong when she comes home, the father said, “I will give her a hug. I wouldn’t need to do anything else.”