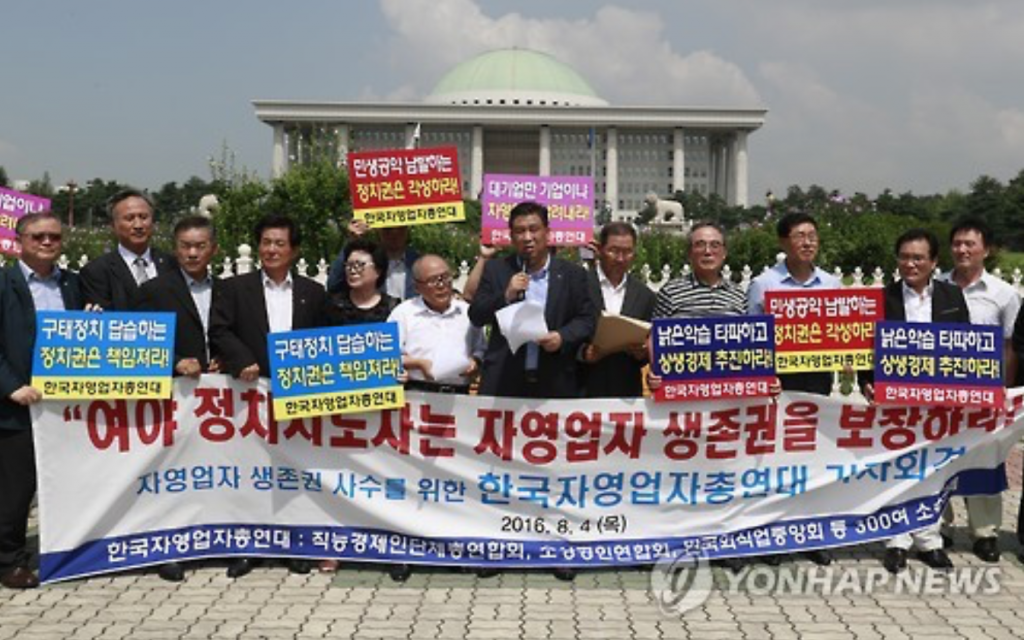 This photo, taken on Aug. 4, 2016, shows a group of self-employed people holding a press conference in front of the National Assembly in Seoul to call for measures to help their businesses. (image: Yonhap)

SEOUL, Dec. 1 (Korea Bizwire) – The number of one-man operations in South Korea swung to an upturn in the third quarter of this year, government data showed Thursday, apparently as more people set up shop for “non-voluntary” reasons amid a prolonged economic slump.

The country’s mom-and-pop businesses, which don’t hire workers, numbered 4.09 million as of the end of September, up 1.3 percent from a year earlier, according to the data by Statistics Korea.

It marks the first time since the first quarter of 2013 that the number has increased on-year on a quarterly basis.

After registering a 0.5 percent gain for the January-March period of 2013, the figure had been decreasing at an annual rate of 2 to 3 percent.

Self-employed men led the third-quarter increase. The number of one-man operations run by men surged 2.6 percent from a year earlier to 2.88 million as of the end of September.

Analysts said the number of one-man operations rebounded in the third quarter as jobless people and retired baby boomers set up restaurants and other businesses to make a living.

They expressed concern that owners of one-man operations are faced with a host of negative factors, including the long-running weakness of the country’s economy and a recent surge in borrowing costs.

Hit by the economy’s sluggishness, output index in the local restaurant industry tumbled to a five-year low of 85.2 in September.

In one of the latest setbacks, South Korea’s industrial output dropped 1.6 percent on-year in October on a sharp fall in mobile devices and cars, marking the second consecutive month of decline.

Industry watchers warned that one-man operations could bear the brunt of the recent upturn in bank lending rates because most self-employed people rely on loans to start businesses.

“The situation is not good as the restaurant and lodging industries are faced with the worst business conditions amid a rise in the number of self-employed people without workers,” said professor Kim Kwang-seok of Hanyang University in Seoul. “Bankrupt one-man operations are feared to create a vicious circle of further undermining the nation’s overall economy.”

According to the latest central bank data, bank lending rates on new household loans edged up 0.05 percentage point in October from the previous month.