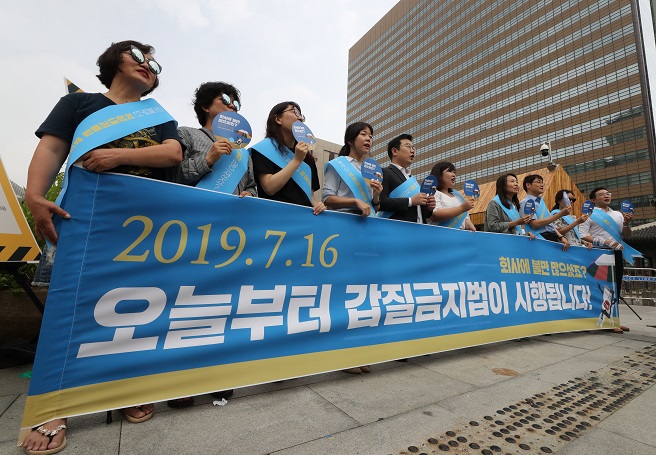 SEOUL, Jan. 13 (Korea Bizwire) — More than eight out of 10 people consider “gapjil,” a phenomenon referring to abusive conduct by people in positions of power toward those under their influence, a serious problem plaguing society, a poll showed Wednesday.

Gapjil is a portmanteau term that refers to an authoritarian attitude or actions toward those on the weaker end of a power relationship, often spotted in workplaces cultures.

In a R&R Consulting survey conducted on 1,500 adults aged between 19 and 69, 83.9 percent answered that the gapjil problem is serious in Korean society. The poll was conducted from Nov. 29 to Dec. 2 last year.

The rate has decreased from the 90 percent and 85.9 percent responses in similar surveys conducted in 2018 and 2019, respectively.

Of the respondents, 26.9 percent said they experienced gapjil in the past year.

Gapjil in the supervisor-subordinate relationship at workplaces was mentioned the most with 32.5 percent, followed by cases of friction between large corporations and subcontract firms with 20.8 percent and between public service workers and private citizens seeking administrative help with 15.5 percent.

“Just endure” was the most mentioned way of dealing with gapjil at 70.1 percent. Of those, 39.6 percent said they tolerated gapjil due to concerns of repercussions.

Of the surveyed, 40.7 percent mentioned authoritarian culture as the cause of gapjil, followed by a lack of a sense of ethics among individuals and relatively weak punishment toward perpetrators, with 25.4 percent and 18.1 percent, respectively.

The survey had a confidence level of 95 percent and a margin of error of plus or minus 2.5 percentage points.