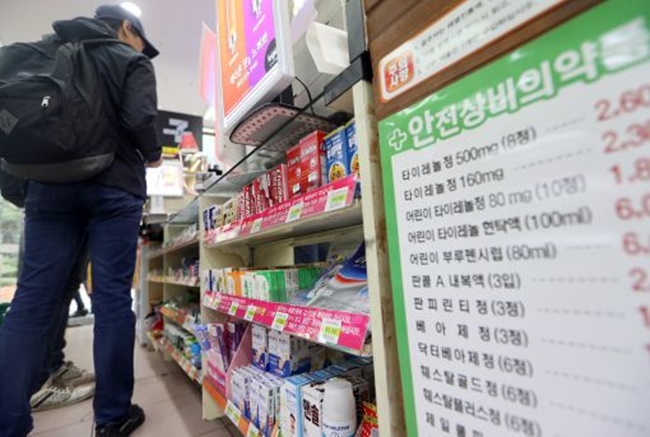 According to distribution statistics released by the Health Insurance Review & Assessment Service on Thursday, over 9.8 billion won worth of the caplet type of 500 mg Tylenol was supplied in 2016 alone, becoming the most popular item among the 13 non-prescription drugs sold at convenience stores.

Following the pain reliever was cold medicine Pancol A and Panpyrin-T, for which market supply amounted to 5.7 billion and 3.2 billion won, respectively.

Currently, fever reducers and painkillers such as Tylenol and Brufen, cold medicines such as Pancol and Panpyrin, and digestive medicines like Bearse are available at convenience stores in South Korea, after legislation allowing their sale was passed in 2012.

The data also showed a total of 57.1 trillion worth of drugs were distributed in the market, up 8.9 percent from the previous year.

The figure includes all medication traded from wholesalers to retailers before reaching customers.

Nearly 23.7 trillion won worth of drugs were distributed to medical institutions including hospitals and pharmacies in 2016, up 9.6 percent from the year before, among which nearly 83 percent were covered by the national health insurance.

When broken down in detail, drugs sold at pharmacies accounted for 63.4 percent of the total, while those sold at hospitals accounted for over 35 percent.