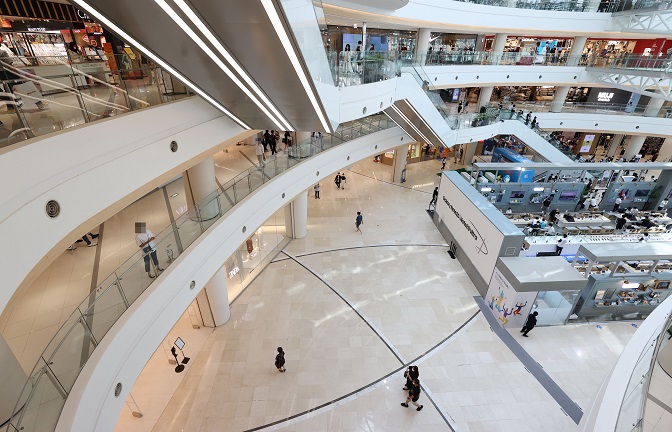 Cafes, restaurants and shopping malls at busy areas like Seoul’s Gangnam were relatively empty over the weekend. The few visitors who were at the venues generally wore masks and stood apart from one another.

A popular restaurant at a Gangnam shopping mall was half empty on Sunday afternoon, drawing a contrast to the long queue that usually forms in front of the eatery.

“I didn’t even attempt to visit (the restaurant) since I heard the average waiting time is at least one hour. I was taken aback by how empty it is,” said a 27-year-old office worker surnamed Park.

Waiters at restaurants were tending to other tasks as customers did not show up.

“There were people waiting even last weekend, but now I’m even bored since there are no customers,” a 24-year-old part-time worker surnamed Lee said. “It feels as if there are more workers than customers at this shopping mall.”

Many stores at the underground shopping mall at Express Terminal Station in southern Seoul were closed as the number of shoppers dwindled.

“Since a lot of our sales had come from overseas tourists, it had already taken a toll since the new coronavirus outbreak. It was slightly recovering until the Liberation Day rally struck,” a shop owner said. 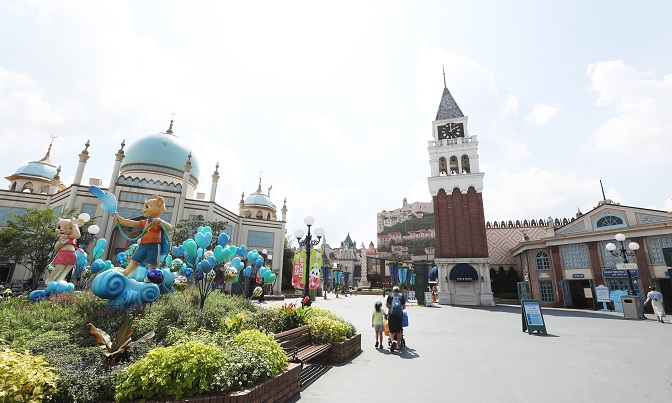 On Monday, South Korea reported 266 new COVID-19 cases, raising its total caseload to 17,665, according to the Korea Centers for Disease Control and Prevention.

While the number marked a sharp slowdown from 397 identified on Sunday, it was also attributed to a smaller number of tests that were carried out on Sunday.

Infections coming from churches in the greater Seoul area and a mass anti-government rally that took place on Liberation Day on Aug. 15 have been at the center of the recent surge in cases.

While most of the recent cases came from Seoul and the surrounding areas, concerns over the infectious virus affected people across the country as chain transmissions were reported.

Beaches in the country’s eastern coastal cities of Sokcho and Gangneung were relatively empty on Sunday as the government officially closed down beaches starting at midnight.

At Hyupjae Beach, a popular spot in the southern resort island of Jeju, there were only around 100 visitors on Sunday afternoon. 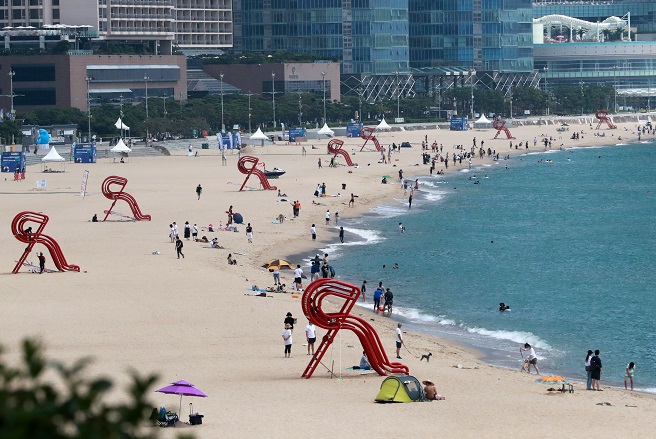 Haeundae Beach, a popular beach in the southeastern port city of Busan, is relatively empty on Aug. 23, 2020. (Yonhap)

Churches across the country were also emptier than usual as most churches switched to online worship under the government’s latest guidelines that ban face-to-face Sunday services.

For some, the recent spike in cases meant canceling or postponing milestone events like weddings.

“Around half of the weddings that were scheduled for Sunday were canceled. Some 70 percent of weddings for next week have also been cancelled,” said an official at a wedding hall in Suwon, south of Seoul.

Health authorities have urged people to stay indoors and refrain from nonessential activities as South Korea is at a “critical moment” in its fight against the new coronavirus.

“If we fail to block the current spread, what waits ahead of us is only a bigger crisis,” Health Minister Park Neunghoo said on Saturday.

But authorities have said that the country may have to tighten this to Level Three, the highest in the three-tier system, if situations do not get better.

“(The ministry) is inevitably planning to review raising (social distancing) to Level Three if the proliferation of infections taking place in the capital area is not blocked within this week,” Park said during the National Assembly’s budget committee session.