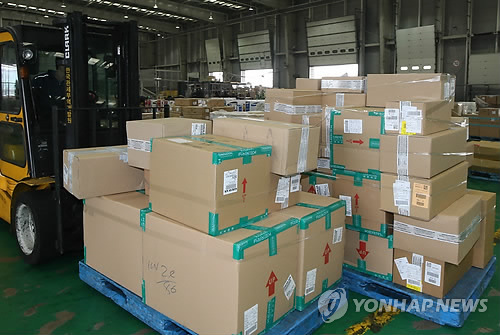 Most direct purchases are made on overseas online shopping malls and market places, such as Amazon.com. (image: Yonhap)

SEJONG, Jan. 25 (Korea Bizwire) — Overseas direct purchases made by South Koreans reached an all-time annual high of US$1.54 billion in 2014, as consumers sought better bargains and a wider choice of products, the customs service said Friday.

Most direct purchases are made on overseas online shopping malls and market places, such as Amazon.com.

The KCS said that while there was still double-digit growth, the number of goods brought into the country dipped from the 57 percent surge tallied in 2011, when total direct purchases reached 5,602. For 2012 and 2013, growth as measured in items, rose 42 percent and 40 percent, respectively.

The office said products brought in from the United States made up 73.5 percent of the total, those from China 10.9 percent, and those from Germany and Hong Kong 5.4 percent and 3.7 percent, respectively.

“Roughly 99 percent of all foreign direct purchases were made in eight countries,” the customs service said. The other four are Japan, Britain, France and New Zealand.

“The numbers show most purchases are small scale, although there was a sharp increase in products that cost more than $1,000,” it said.

Of all products brought into the country, 96 percent were not taxed last year.

By item, 19 percent of direct purchases were clothing, followed by health food, shoes and cosmetics.

The KCS said the increase in direct purchases could fuel competition in the country’s retail sector and trigger a move by companies to improve efficiency and services for local consumers.