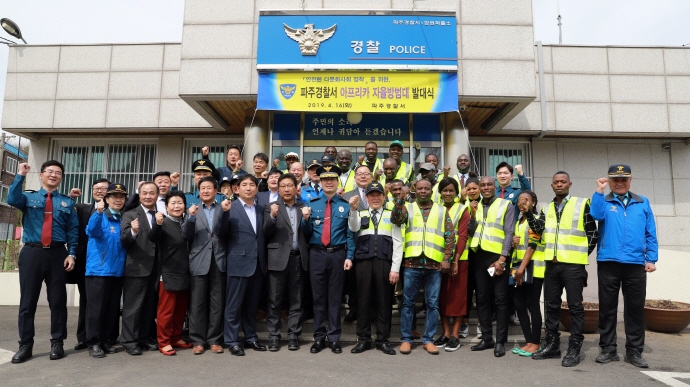 PAJU, Apr. 17 (Korea Bizwire) — Paju Police Station in Gyeonggi Province announced on Tuesday that it has launched the country’s first “African Patrol Team” comprised of residents from the African continent.

A patrol team refers to a team formed by local residents to work with local police, such as district police and police stations, to prevent crimes.

The “African Patrol Team” is composed of 13 Ghanaians and eight Cameroonians living in Paju. The team has been dubbed PAP, short for Paju African Patrol-team.

PAP will conduct surveillance of criminals in areas where foreigners are concentrated, actively report crimes committed by foreigners, and lead youth activities in multicultural families once a month.

The team is also expected to serve as a stepping stone for local residents and foreigners.

A total of 410 foreigners from Africa, including 170 Ghanaians and 60 Cameroonians, live in Paju. Most are workers at factories in the area.