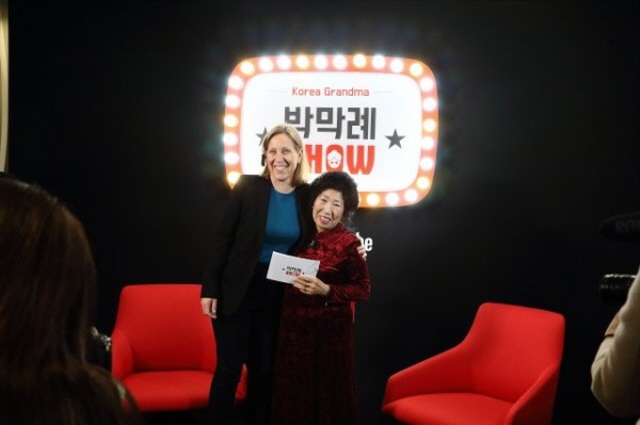 SEOUL, Apr. 23 (Korea Bizwire) — Park Mak-rye, the ‘Korea Grandma’ behind one of the county’s most popular YouTube channels, showed off her presence as she even met with YouTube’s CEO.

KPR & Associates, a public relations firm representing YouTube, reported on Monday that it had released the contents of Park’s meeting with YouTube CEO Susan Wojcicki the previous day.

Wojcicki, who visited South Korea last month, was invited as a guest on the “Park Mak-rye Talk Show”, and had participated in frank and candid conversation.

In 2017, Park received a “Silver Play Button” given to YouTube channels that have more than 100,000 subscribers, and last year she was invited to visit the Google headquarters in California as a Korean representative, but this is the first time she has met Wojcicki.

Park asked Wojcicki about her dreams as a CEO of YouTube. In response, Wojcicki replied that she hoped people around the world would have a chance to tell their stories, just as the story of Park was told through YouTube.

Furthermore, Park and Wojcicki bonded by talking about difficulties as working mothers.