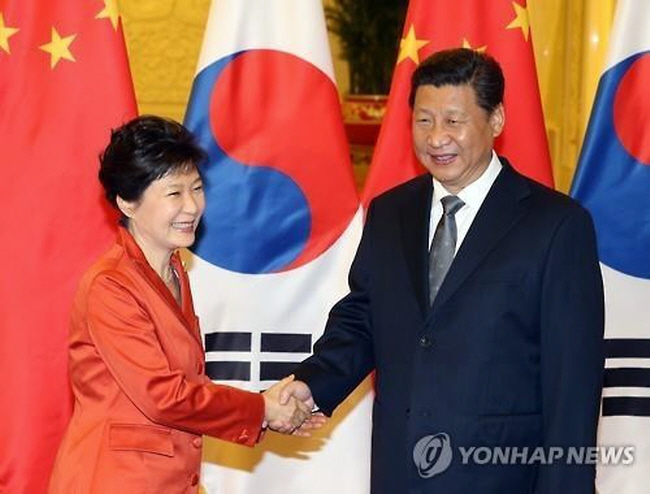 Park’s decision to attend the Sept. 3 parade marking the 70th anniversary of the end of World War II in Beijing came as the United States and other Western countries have shunned the event, a huge show of force amid China’s increasingly assertive actions in territorial disputes with its neighbors.

About 12,000 Chinese troops and new machines of war will be on display at Tiananmen Square, the site of China’s bloody crackdown on pro-democracy demonstrations in 1989.

Shi Yongming, a researcher at the China Institute of International Relations, said the decision by Park followed what he calls “silent pressure” from the U.S. that reportedly asked South Korea not to attend the Chinese military parade.

“The decision by President Park Geun-hye shows a genuine image of a sovereign state,” Shi said in his op-ed posted on the website of the People’s Daily, the mouthpiece of the Chinese Communist Party.

South Korea and China are former battlefield foes as China fought alongside North Korea in the 1950-53 Korean War, while the United States and 20 other allied countries fought on South Korea’s side under the U.N. flag.

But Seoul and Beijing have steadily improved ties since establishing diplomatic relations in 1992.

Another Chinese media outlet has said that Park’s visit to Beijing next week would send a message to Japan that Seoul and Beijing have a common stance on historical issues.

The China Daily said that Park’s attendance at the Sept. 3 celebrations “sends the message that Beijing and Seoul stand on the same ground when it comes to historical issues.”

Japanese Prime Minister Shinzo Abe made a statement earlier this month marking the 70th anniversary of the country’s surrender in the war.

In the statement, Abe expressed deep remorse over Japan’s wartime past and that previous apologies were unshakable, but stopped short of making his own apology.