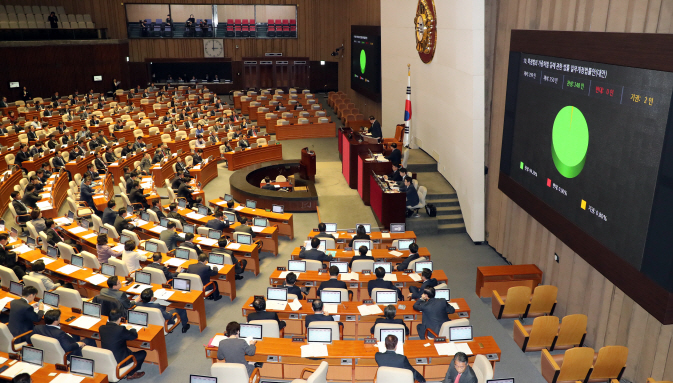 SEOUL, Nov. 28 (Korea Bizwire) — The National Assembly on Thursday passed a proposal aimed at toughening the punishment for drunk driving at its plenary session.

Parliamentary committees separately passed two revised proposals designed to increase punishments in the case of driving under the influence (DUI) a day earlier.

The so-called Yoon Chang-ho acts consist of a motion to make offenders face up to life imprisonment when DUI causes death and a revised bill to impose aggravated penalties for drunk drivers who are caught more than twice.

Only the former was put up for Thursday’s vote. The other bill has yet to be tabled in the legislation committee — its passage is essential to enable a vote at a plenary session.

In October, more than 100 lawmakers co-authored the bill on drunk driving, prompted by Yoon’s car accident.

Yoon, a 22-year-old soldier, died earlier this month, having being in a coma since September, when he was struck by a drunk driver in the southern port city of Busan.

Yoon’s accident has sparked public outrage at drunk driving and the lenient punishments for offenders.

Under the new bill, drunk drivers will face at least three years in jail and up to life imprisonment when DUI results in death. Currently, punishments are lighter, with such offenders facing jail terms of at least one year.

In the case of injury, offenders will face jail terms from one year to 15 years, while the current law stipulates imprisonment of up to 10 years with no minimum term.

But Yoon’s family expressed regret that the bill was not passed in its original form.

His family and friends demanded at least five years in prison in the case of DUI-induced death, but lawmakers cut the term to at least three years.

“I believed that the bill would be passed as it was. It is very regrettable that lawmakers do not read public sentiment,” Yoon’s father said.

Rep. Ha Tae-keung who led the submission of the bill, also voiced regret that there is still a belief in society that deaths resulting from drunk driving are accidents rather than negligent homicides.

Yoon’s friends who participated in the bill’s legislative process in some way called for continued public attention to the issue.

“We’ve made efforts for Chang-ho and made a miracle,” Lee Young-kwang told reporters.

At Thursday’s session, lawmakers also passed 60 other bills, including a revised bill to strengthen the punishment for sexual violence.