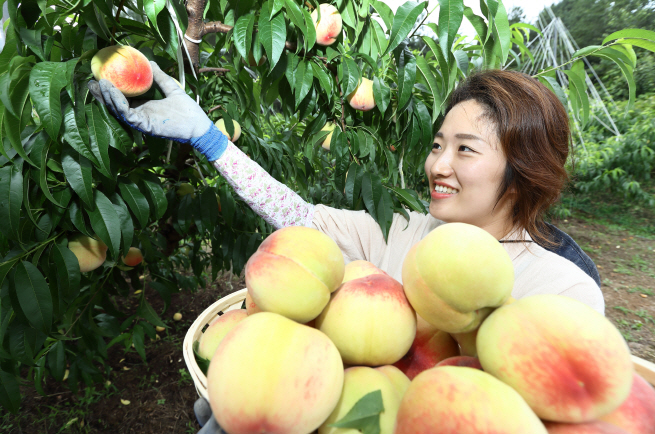 Peaches have been grown more as alternative crops since 2000, as the domestic cultivation of pears and grapes has decreased sharply. (image: Rural Development Administration)

SEOUL, Jul. 30 (Korea Bizwire) — Over the past 38 years, the total income of farmers who grow peaches and onions has increased the most, a recent report has revealed.

According to Statistics Korea’s survey of the total income changes for growers of 17 major crops between 1980 and 2018, peaches, with an average annual increase in income of 8.3 percent and onions, with an increase of 8.2 percent ranked at the top of the list.

Following behind were grapes at 7.6 percent, mandarins at 6.6 percent, pears at 6.3 percent and apples at 5.1 percent.

According to an official at Statistics Korea, “As consumption of peaches and onions increased significantly, they became top money-making crops for farmers.”

In particular, peaches have been grown more as alternative crops since 2000, as the domestic cultivation of pears and grapes has decreased sharply, and the demand for onions has also increased steadily since 2000, the official added.

The crop with the largest growth in plantation area (3.3 percent) and production (4.6 percent) over the past 38 years was onions.

On the other hand, three types of barley have seen their combined income decline annually over the past 38 years, with rye coming in at -1 percent, unhulled barley at -0.7 percent and two-row barley at -0.2 percent.

“Barley is the only major crop to have seen its cultivation, production and total income drop,” said an official from Statistics Korea.

The official also added that consumption of barley has dropped significantly and it is no longer a profitable crop to farm.

“Young South Koreans eat less kimchi than before, reducing the production and cultivation area of cabbage,” said an official from Statistics Korea.

“As kimchi consumption has decreased, the production of red pepper and garlic have also dropped.”