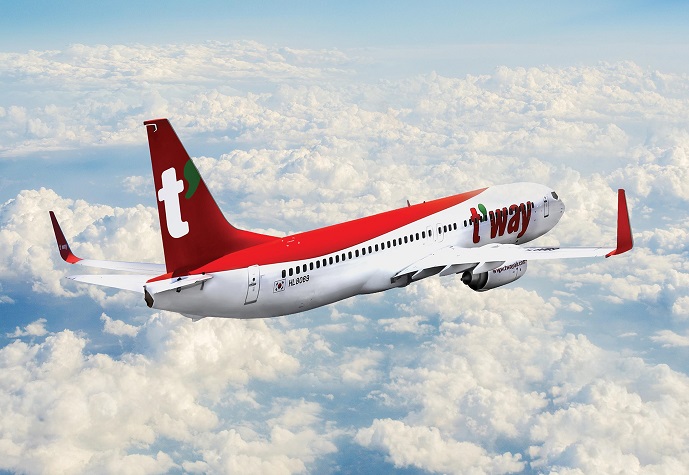 This file photo provided by T’way Air shows a B787-800 passenger jet flying in the sky.

T’way Air will begin using two of its 27 B737-800 passenger jets to carry cargo on the Incheon-Ho Chi Minh City route in early November as the COVID-19 pandemic has driven down travel demand and its earnings, the company said in a statement.

The company will place the cargo, such as textiles and electronic parts, on the seats of the two B737-800s and it will consider utilizing more passenger jets for cargo delivery depending on market conditions, it said.

Cargo-carrying demand has jumped this year as more than 180 countries and territories have closed their borders or imposed entry restrictions on incoming passengers amid virus fears.

T’way Air suspended most of its international routes in March.

The company began flights to the Chinese city of Wuhan on Sept. 16, marking the reopening of the air service to the epicenter of the virus outbreak after eight months.

T’way was originally scheduled to begin services on the Wuhan route on Jan. 21, but the outbreak of the deadly respiratory illness temporarily suspended the plan.

T’way resumed flights to Yanji on Aug. 20 to meet business demand. It has been operating a sharply reduced number of flights on domestic routes since March.