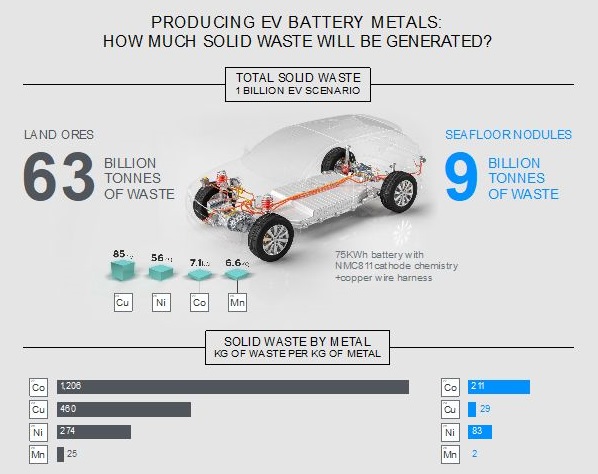 Increased production of battery metals will generate significant waste streams which could be reduced by using deep-sea polymetallic nodules.

Published in the Yale Journal of Industrial Ecology, the new peer-reviewed study starts with a demand scenario of producing four metals (nickel, cobalt, manganese, copper) to supply one billion 75KWh EV batteries with a cathode chemistry of NMC 811 (80% nickel, 10% manganese, 10% cobalt). It then compares the solid waste streams generated during the production of these four metals from two sources: conventional ores found on land and polymetallic nodules with high concentrations of four metals in a single ore found on the seafloor of the Clarion Clipperton Zone (CCZ) of the Pacific Ocean.

Daina Paulikas of the University of Delaware’s Minerals, Materials and Society Program, said: “Over the past three years, my co-authors and I have undertaken a series of systems-based analyses considering comparative impacts of metals produced using seafloor nodules vs. land-based ores, including a peer-reviewed study on climate change impacts which noted up to a 90% reduction when sourcing metals from nodules. In our new publication, we set out to map the waste streams that may be expected as the world rushes to source metals to decarbonize our energy and transport systems, and to provide an integrated assessment of the risks that such waste flows entail.”

A photo accompanying this announcement is available at https://www.globenewswire.com/NewsRoom/AttachmentNg/7ff427c0-f432-4a4a-9d42-9722c5bfdeab

Paulikas and co-author Dr. Steven Katona from the College of the Atlantic, added: “Overall, our combined quantitative and qualitative systems analysis — which included quantification and allocation of waste streams followed by a qualitative risk assessment for each waste stream — implies that the waste streams generated by nodules should be significantly smaller, and in most cases of lower overall impact, with the exception of seafloor and midwater sediment plumes whose effects are still under scientific investigation.”

Production of energy transition metals will need to increase six-fold by 2040 to meet the world’s ambitious climate targets, according to the International Energy Agency. The mining industry is already the single largest source of industrial waste on the planet. Meeting these goals would generate more than a six-fold increase in solid waste streams due to the continued decline in ore grades on land. The overall impact of these waste streams would likely become more severe as mining of metals like nickel is expanding into places with extreme biodiversity like the rainforests of Indonesia and the Philippines — the two countries where according to analysts most new nickel supply will come from in the coming decades.

Waste generation for a single EV

The researchers noted that every kilogram of class I nickel mined and produced today can result in between 50 to 160 kg of potentially toxic tailings that must be managed indefinitely. Production of nickel, cobalt, copper and manganese for a single EV with a 75kWh battery creates 40 to 61 metric tons of waste, around 50% of which is tailings. Over the next 20 years, this range is estimated to average 50-75 metric tons as copper and nickel ore grades continue to decline. The research suggests that using CCZ polymetallic nodules to produce battery metals over the next 20 years could reduce per-EV waste by 59 to 93%, including a 79 to 96% reduction in tailings.

Modelling a range of processing flowsheets – from near zero to very high solid waste — the researchers found that nodules delivered much smaller waste outputs, thanks in large part to the presence of high grades of four metals in a single ore and an absence of toxic levels of heavy elements that enables the design of metallurgical flowsheets with near-zero solid waste.

As concerns grow regarding the environmental and social implications of land-based mining and processing tailings — often toxic waste that must be contained inside engineered dams indefinitely, dry-stacked and protected or disposed of in the ocean — the massive deposit of polymetallic nodules in the CCZ offers a pathway to greatly reduce the waste footprint of the clean energy transition. Researchers note that while there is no overburden to remove from the abyssal plain to access the polymetallic nodule resource, the collection of nodules disturbs seafloor sediment and the resulting sediment plume has been treated as a waste stream.

“Our systems analysis included quantification of the expected amount of sediment plumes, both at the seafloor and at the point of reinjection of seawater used for nodule transport in the riser (~1000 m below sea level or deeper), because disruption of this mass is a cause of concern for harming species and habitats of the abyssal seafloor and the midwater column,” added Dr. Katona. “In our analysis, sediment plume is the single biggest waste stream that would be generated by metal production from nodules. As more research institutions and polymetallic nodule companies perform their collector tests and publish their research and Environmental Impact Statements, it will be possible to further refine our quantifications of plumes and better characterize their impacts.”

About The Metals Company

TMC the metals company Inc. (The Metals Company; TMC) is an explorer of lower-impact battery metals from seafloor polymetallic nodules, on a dual mission: (1) supply metals for the clean energy transition with the least possible negative environmental and social impact and (2) accelerate the transition to a circular metal economy. The company through its subsidiaries holds exploration and commercial rights to three polymetallic nodule contract areas in the Clarion Clipperton Zone of the Pacific Ocean regulated by the International Seabed Authority and sponsored by the governments of Nauru, Kiribati and the Kingdom of Tonga. More information about The Metals Company is available at www.metals.co.

Certain statements made in this press release are not historical facts but are forward-looking statements for purposes of the safe harbor provisions under The Private Securities Litigation Reform Act of 1995. Forward-looking statements generally are accompanied by words such as “believe,” “may,” “will,” “estimate,” “continue,” “anticipate,” “intend,” “expect,” “should,” “would,” “plan,” “predict,” “potential,” “seem,” “seek,” “future,” “outlook” and similar expressions that predict or indicate future events or trends or that are not statements of historical matters. The forward-looking statements contained in this press release include, without limitation, statements that waste streams could be reduced by using deep-sea nodules. These forward-looking statements involve significant risks and uncertainties that could cause the actual results to differ materially from those discussed in the forward-looking statements. Most of these factors are outside TMC’s control and are difficult to predict. Factors that may cause such differences include, but are not limited to: regulatory uncertainties and the impact of government regulation and political instability on TMC’s resource activities; changes to any of the laws, rules, regulations or policies to which TMC is subject; the impact of extensive and costly environmental requirements on TMC’s operations; environmental liabilities; the impact of polymetallic nodule collection on biodiversity in the CCZ and recovery rates of impacted ecosystems; TMC’s ability to develop minerals in sufficient grade or quantities to justify commercial operations; the lack of development of seafloor polymetallic nodule deposit; uncertainty in the estimates for mineral resource calculations from certain contract areas and for the grade and quality of polymetallic nodule deposits; risks associated with natural hazards; uncertainty with respect to the specialized treatment and processing of polymetallic nodules that TMC may recover; risks associated with collection, development and processing operations; fluctuations in transportation costs; testing and manufacturing of equipment; risks associated with TMC’s limited operating history; the impact of the COVID-19 pandemic; risks associated with TMC’s intellectual property; and other risks and uncertainties, including those in the “Risk Factors” sections, included in the final prospectus and definitive proxy statement, dated and filed with the Securities and Exchange Commission (the “SEC”) on August 12, 2021 relating to the business combination, in TMC’s Quarterly Report on Form 10-Q for the quarter ended September 30, 2021, filed by TMC with the SEC on November 15, 2021, and in TMC’s other future filings with the SEC. TMC cautions that the foregoing list of factors is not exclusive. TMC cautions readers not to place undue reliance upon any forward-looking statements, which speak only as of the date made. TMC does not undertake or accept any obligation or undertaking to release publicly any updates or revisions to any forward-looking statements to reflect any change in its expectations or any change in events, conditions, or circumstances on which any such statement is based except as required by law.