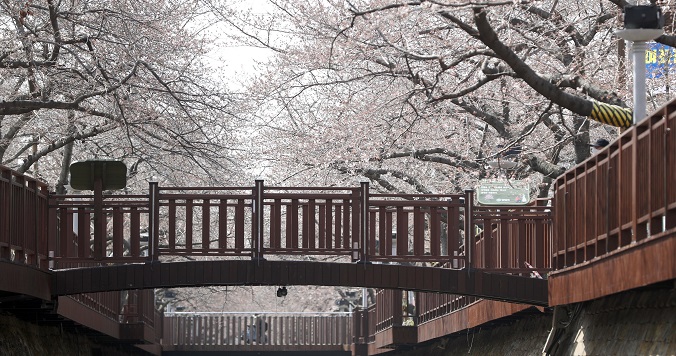 Almost all spring blossom festivals nationwide have been called off or will be held on a sharply reduced scale or in a non-face-to-face manner amid little signs of a letup in coronavirus outbreaks.

Despite the canceled festivals and celebratory events, a substantial number of picnickers are still expected to flock to spring flower hot spots, leaving local quarantine authorities on edge. 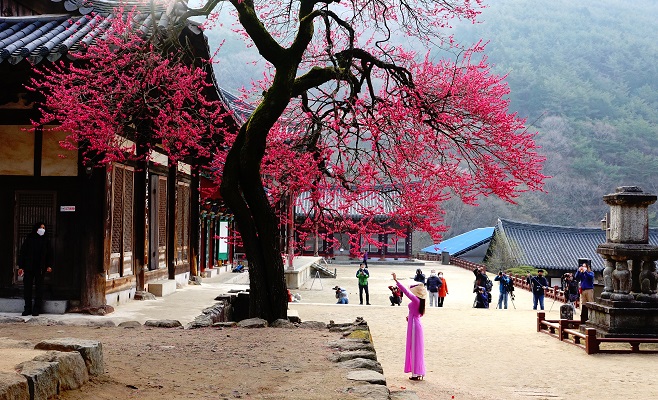 Cherry blossoms, one of the most beloved spring flowers in South Korea, have already bloomed on Jeju Island and in the southern region, but the Jinhae Gunhangje Festival, the nation’s largest and most famous cherry blossom festival hosted by the South Gyeongsang Province city of Changwon, has been canceled for the second consecutive year.

The municipality of Changwon said it will not provide any tourist convenience facilities, such as parking lots and toilets.

Moreover, banners have been installed through the city to announce the cancellation of the Jinhae Gunhangje Festival and ask visitors not to come.

Other large-scale cherry blossom festivals on Jeju Island and in Busan and many other parts of the country, as well as a number of other spring flower festivals, including the Gwangyang International Maehwa (apricot flower) Festival, the Gurye Sansuyu (cornus flower) Festival and Yeosu’s Youngchwi Mountain Azalea Festival, have also been called off for the same reasons.

On the southern resort island of Jeju, for instance, only those who wear masks and undergo fever checks will be allowed to approach the popular cherry blossom viewing spots in the city of Jeju. 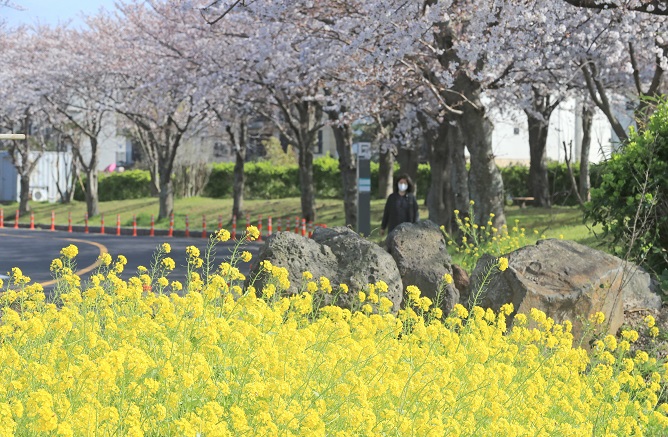 Canola flowers and cherry blossoms are in full bloom in the Jeju Island city of Jeju on March 18, 2021. (Yonhap)

Organizers of other regional flower festivals will also urge tourists to refrain from visiting their spring flower hot spots through banners or social media.

The central city of Cheongju plans to issue an administrative order mandating that all people visiting both sides of the Musim stream, where cherry blossoms are soon to be in full bloom, keep a distance of more than two meters from others from March 27 and April 11.

The Musim stream featuring about 2,200 cherry trees is one of the most popular cherry blossom hot spots in the central region.

The city government will prohibit parking and stopping of all vehicles along the stream, as well as street vendors and eating and drinking outdoors.

It will also install hand sanitizers at about 40 locations and turn off landscape lights that used to light up flower paths at night. Violators will be fined 100,000 won (US$89), the city warned.

Meanwhile, the annual Jeju Canola Flower Festival hosted by the Seogwipo city will be held in a drive-thru format this year, officials said.

During the drive-thru flower festival slated for April 6-8, tourists will be allowed to enjoy canola flowers while riding in their own vehicles. Safety personnel will enforce a ban on parking and stopping of vehicles along the viewing route.

Another canola flower festival hosted by Busan will be held on a sharply reduced scale, as the number of visitors will be limited to fewer than 50 per hour.

In Seoul, the authorities are to enforce temporary traffic control in parts of Yeouido, which boasts one of the most popular cherry blossom streets in the capital with its 1.7 kilometer-long cherry blossom tunnel every spring.

During the pedestrian and road traffic control slated for April 1-12, only those who apply for cherry blossom viewing programs and are selected by lottery will be allowed into the Yeouido cherry blossom street, officials said.