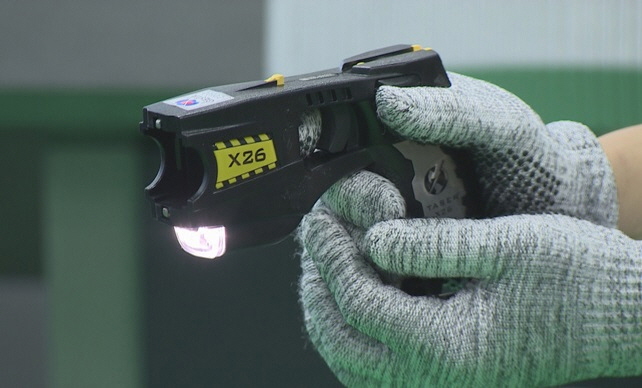 SEOUL, Nov. 25 (Korea Bizwire) — Police will introduce a multiple-shot stun gun, a less lethal pistol and other new weapons to cope better with violence, officials said Thursday, amid heavy criticism over a bungled police response to a recent knife attack.

The new stun gun allows three consecutive shots and logs records of time and location of the use, while the less lethal gun uses special bullets with one-tenth of the killing power of ordinary pistols, according to the officials.

The current police stun guns, all imported from the United States, only allow a single shot.

Police will officially use the upgraded stun gun after 100 police officers conduct a six-month trial starting in January and the alternative gun after they submit a safety test report to the National Assembly.

The gun’s safety is currently being tested at a university research institute.

The weapon reinforcement plan came after criticism that police officers failed to stop a knife-wielding man from seriously wounding a neighbor over a noise dispute earlier this month even though they were deployed at the scene and were in possession of a stun gun and a gun at the time.

One of the two officers left the scene to call for help even after witnessing the stabbing, leaving family members of the victim to deal with the violence on their own.

National police chief Kim Chang-yong has apologized over the case, and the two officers have been removed from their positions.