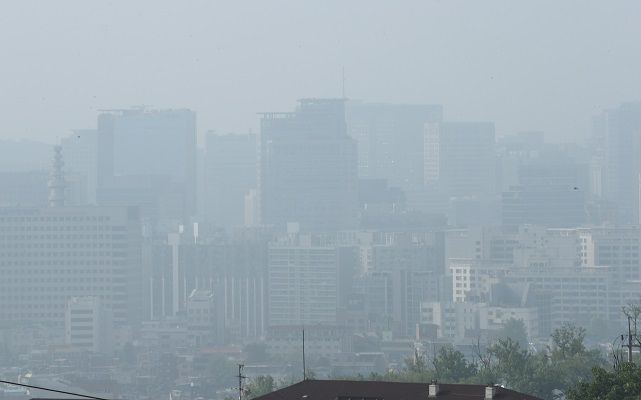 SEOUL, June 13 (Korea Bizwire) — Reducing fine dust particles should be the top priority among the government’s environmental policies, according to a poll of ordinary citizens and experts released on Saturday.

The poll was conducted by the Ministry of Environment on 700 citizens and 510 experts last year to collect their opinions on environmental policy priorities and measure their policy satisfaction levels.

It found 37.9 percent of citizens and 37.3 percent of experts pointing to the creation of a safe atmospheric environment free from fine dust pollution as the highest priority among the ministry’s policy tasks.

As a second policy priority, 21.6 percent of citizens and 23.7 percent of experts called for responding actively to climate change to realize a sustainable future society.

In case of a third policy priority, 10.6 percent of citizens cited the creation of a safe drinking water supply base and the establishment of an integrated water management system, while 8 percent of experts asked for realizing a circular economic society through a virtuous cycle of resources.

The ministry said its fine dust policy last year scored a satisfaction score of 57.1 points from citizens, the lowest among its policy items.

Asked about the reasons for low satisfaction with the fine dust policy in 2019, 37 percent of citizens said there were insufficient tangible policy effects.

About 33 percent of them also stressed efforts for new legislation and legal revisions to enhance fine dust policy effects.

Meanwhile, the overall satisfaction score for the ministry’s major policy measures was tallied at 60.1 points last year, up 0.4 from the previous year.

The level of satisfaction perceived by the public fell 0.3 point to 58.9 points, while the expert group increased their satisfaction score by 2.2 points to 62.9 points.

“Recently, the public’s interest in and expectations for environmental policies have increased, due to a string of environmental problems involving fine dust pollution and environmentally harmful substances,” the ministry said, vowing to continue to promote and manage policies so that the people can better experience the effects of each policy.