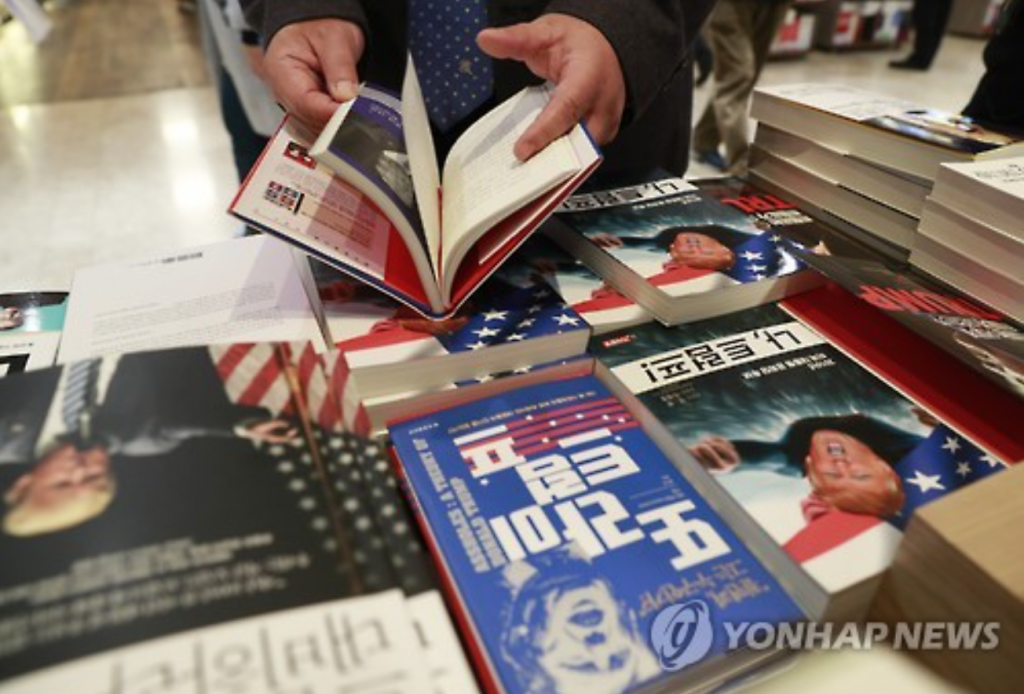 At the moment, there are around a dozen books published in Korea either written by Mr. Trump or on his views and perspectives as a leader. (image: Yonhap)

SEOUL, Nov. 11 (Korea Bizwire) – Books authored by Donald Trump, the president-elect of the United States, have grown extremely popular following the announcement of the election results on Wednesday.

Some 1,200 units of Trump’s Crippled America: How to Make America Great Again were sold on November 9 alone as the news of the unprecedented outcome hit the media, said the book’s local publisher Ire Media. An average of 10 books were sold prior to Wednesday, according to the company.

“The 3,000 first prints are almost sold out,” said an official. “With the ongoing orders that we received, we decided on an additional print.”

“We saw how Trump was depicted here in a rather distorted way, which made us feel that it’s important to convey his views more accurately. That’s how we decided to publish his writing in Korea.”

A local book titled Prepare for Trump Presidency (translated) has experienced a similar phenomenon, with its second edition due for imminent release.

The book is co-written by Kim Chang-joon (Jay Kim), the former member of the U.S. House of Representatives from California, and foreign affairs analyst Kim Won-sik, and probes the reasons behind Trump’s popularity and the repercussions that the “Trump Hurricane” may bring about.

According to online bookstore Yes24, 456 books related to the new president-elect had been sold since November 9 as of 11 a.m. on November 10. Another online store Interpark Books also said Thursday that sales soared by roughly 9.5 times on November 9 compared to November 8.

At the moment, there are around a dozen books published in Korea either written by Mr. Trump or on his views and perspectives as a leader.

According to experts, Crippled America would be the book best suited for a reader trying to predict the policies of the 45th President of the United States.

The book explores Mr. Trump’s political ideology on a multitude of issues from immigration, healthcare and education to the media, taxation, and energy, which would “make America great again.”

Another book that presents Mr. Trump’s viewpoint and attitude is Trump: The Art of the Deal, a memoir first published in 1987. Offering a business perspective of the real estate mogul, the book highlights 11 of his principles such as “think big,” “maximize your options,” and “fight back.”