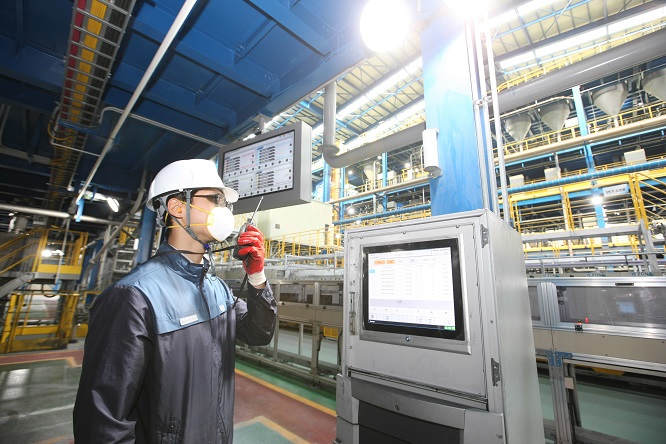 An employee of POSCO Chemical Co., an affiliate of South Korea’s steel giant POSCO Group, checks the production line for anodes, one part of lithium-ion batteries used in electric vehicles, in this photo provided by the company on April 5, 2021.

SEOUL, May 31 (Korea Bizwire) — POSCO has teamed up with a Chinese company to roll out an eco-friendly secondary cell recycling business.

The world’s fifth-largest steelmaker by output recently signed an investment contract with the South Jeolla provincial government for the development of the new entity.

Prior to this, POSCO established a joint venture POSCO HY Clean Metal with China’s Huayou Cobalt Co., a specialist in the smelting and refining of metals, with the Korean steelmaker taking a 65 percent stake.

Waste cell scraps from European battery plants will be crushed and processed into ‘black powder’ that will be imported by the joint venture.

The black powder will be extracted into key cathode materials such as nickel, lithium, and manganese through a recycling process in Korea.

To this end, POSCO will invest 120 billion won (US$175 million) to build a facility at the Yulchon Industrial Complex in Gwangyang, 420 kilometers south of Seoul, that will have the capacity to process up to 10,000 tons of black powder per year.

It is expected that construction of the new facility will commence before the end of the year.

The secondary cell recycling market is forecast to be valued at 8 trillion won in 2030, accounting for 20 percent of raw materials in the electric car industry.