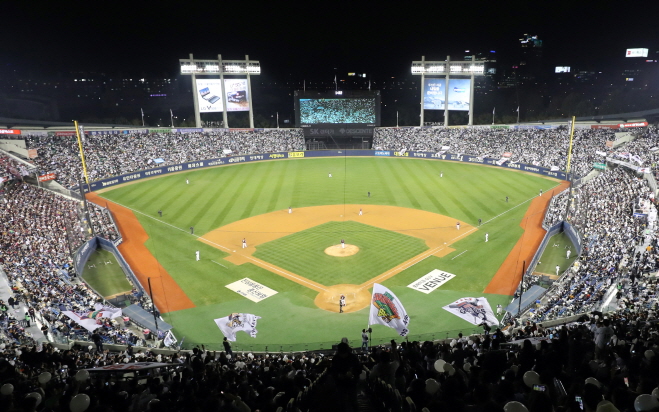 This file photo from Oct. 22, 2019, shows fans attending Game 1 of the Korean Series between the Doosan Bears and the Kiwoom Heroes at Jamsil Stadium in Seoul. (Yonhap)

SEOUL, Feb. 27 (Korea Bizwire) — The South Korean baseball league canceled all of its preseason games on Thursday in response to the recent surge in novel coronavirus infections across the country.

The Korea Baseball Organization (KBO) announced that all 50 preseason games, scheduled to run from March 14 to 24, will be wiped out, as baseball joins a series of other sports in canceling or postponing key events for spring.

The KBO has never before had to cancel an entire schedule of exhibition games since its inception in 1982.

The regular season is set to begin on March 28, but that could also be in doubt, with the spread of COVID-19 showing no signs of abating.

The KBO said it will hold an emergency meeting of its executive committee — made of general managers of the league’s 10 teams — next Tuesday to discuss potential changes to the regular season schedule.

The 2020 regular season will be halted during the summer for the Tokyo Olympics, and the postseason will most likely drag into November, with or without any further disruption caused by the virus.