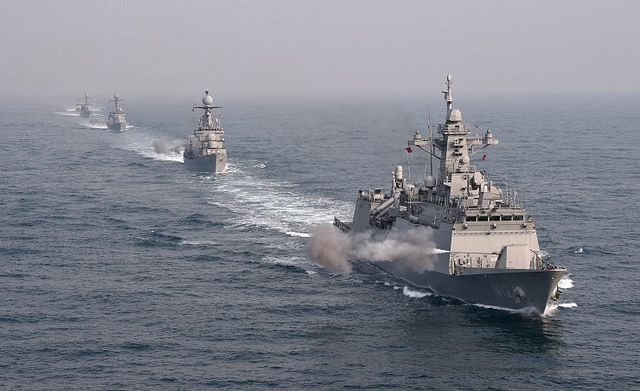 SEOUL, May 31 (Korea Bizwire) – President Moon Jae-in on Wednesday vowed to build a stronger maritime nation by bolstering its economic and military powers at sea.

As part of the efforts, he promised to establish a public corporation to provide financial assistance to the nation’s ailing shipping and shipbuilding industries, and revive their global competitiveness. He also vowed to sternly deal with foreign fishing boats’ illegal operation in sovereign waters.

Moon made the remark during a ceremony marking Day of the Seas, saying the waters surrounding the peninsula hold the key to the country’s national security, economy and public livelihoods.

“The new government will consolidate our status as a maritime leader based on strong maritime economic power and naval forces,” he said in an address at the Saemangeum land reclamation site in Gunsan, 274 kilometers south of Seoul. “We will defend our maritime sovereignty at all cost.”

In particular, the president pledged to increase investment in the naval forces as part of the administration’s goal to raise the defense budget to 3 percent of the gross domestic product.

“Based on this, we will make sure not to lag behind in the maritime competition of Northeast Asia and lay a cornerstone for a community of peace and prosperity,” he said.

“We won’t let any force that threatens our maritime security set sights on our seas,” he said.

Moon also promised to increase spending on maritime research and development to levels similar to those of advanced nations and push to find answers to job creation in new future industries centered on the seas.

He addressed the financial plight of the shipbuilding industry, saying it is a core pillar of the nation’s economy.

“In wartime, it is an extremely important key national industry that serves as the fourth branch of the military alongside the Army, Navy and the Air Force,” he said.