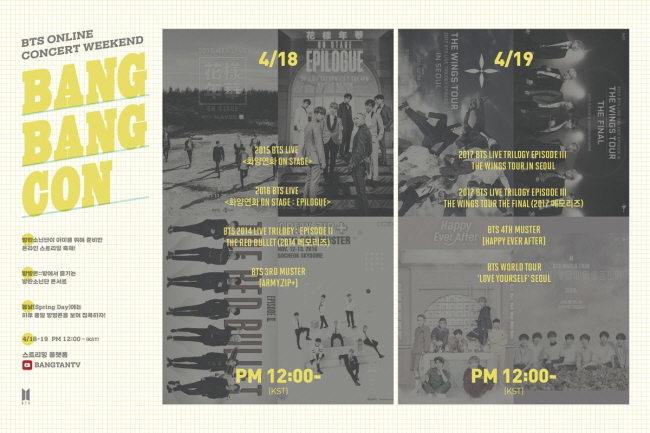 SEOUL, April 14 (Korea Bizwire) — A series of live concerts K-pop boy band BTS performed since 2014 will be shown for free on YouTube this weekend to entertain fans at home in this time of coronavirus self-quarantine.

The band’s management agency, Big Hit Entertainment, said a total of eight concerts and fan meeting events by the boy band will be broadcast on the BTS channel on YouTube, BANGTANTV, on Saturday and Sunday under the title “BTS Online Concert Weekend.”

The first set of four performances, including “2015 BTS Live <The Most Beautiful Moment in Life On Stage>,” “BTS 2014 Live Trilogy : Episode II The Red Bullet” and “BTS 3rd Muster [ARMY.ZIP+],” will hit the YouTube channel starting at noon (Korean time) on Saturday.

Another four performances, including “2017 BTS Live Trilogy Episode III The Wings Tour In Seoul,” “Love Yourself Seoul” and “BTS 4th Muster [Happy Ever After]” will be aired Sunday, starting at noon, according to Big Hit. Access to the two-day online music fest is free.

The program was arranged after BTS canceled the inaugural Seoul and American legs of its new world tour, “Map of the Soul Tour,” which was originally set to kick off in April, due to the COVID-19 pandemic.

“Connected to (the official fan community application) Weverse through Bluetooth, the light stick will change color in accordance with the playlist so that fans can fully enjoy the show as if they are at a concert,” Big Hit said.