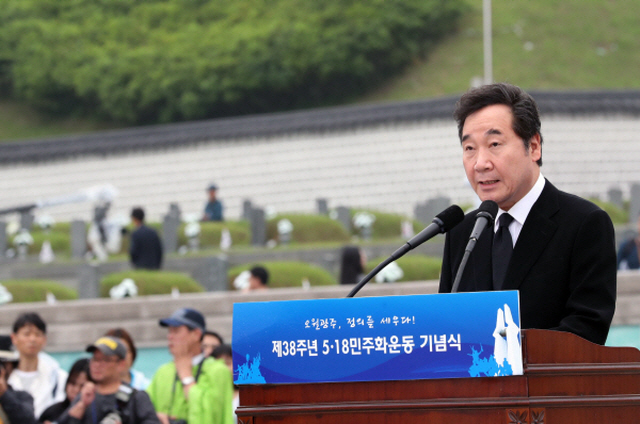 Prime Minister Lee Nak-yon delivers a speech commemorating the anniversary of the 1980 pro-democracy uprising in Gwangju during a ceremony at a national cemetery on May 18, 2018. (image: Yonhap)

SEOUL, May 18 (Korea Bizwire) — Prime Minister Lee Nak-yon said Friday that those distorting what happened during the bloody crackdown on a 1980 pro-democracy uprising will face the “judgment of truth,” apparently referring to former President Chun Doo-hwan.

During a ceremony to commemorate the May 18 democracy movement in the southwestern city of Gwangju, Lee also expressed deep regret about the “criminal behavior” of the past government in the tank-led quelling of the uprising that left hundreds of people killed and thousands wounded.

“Those who should take responsibility (for the brutal crackdown) even distorted the truth and damaged the honor of Gwangju,” Lee said in an speech at the national cemetery for victims of the crackdown. “(They) won’t be able to avoid the judgment of truth.”

In the 1980 revolt, thousands of Gwangju citizens rose up against the military junta of the time, led by Gen. Chun Doo-hwan, who seized power in an internal coup, following the assassination of his mentor, President Park Chung-hee, eight months earlier.

The junta sent tank-led paratroopers to ruthlessly crack down on the nine-day revolt.

Chun, 87, was sued for allegedly defaming Gwangju citizens in his memoir published last year. In the book, he claimed that North Korean troops were involved in the uprising, that he was not involved in the crackdown and that the movement was quelled without the use of violence, including firing from helicopters.

Chun insisted in his memoir that the witnesses who say they saw helicopters shooting protesters faked the photos showing those scenes. He called a late pastor who had testified about the choppers firing “Satan wearing a mask.”

Prosecution officials said the helicopter attack has been confirmed through “objective data,” citing confidential documents held by the U.S. Embassy in South Korea that state the shooting did take place after the military sounded warnings to the protesters.