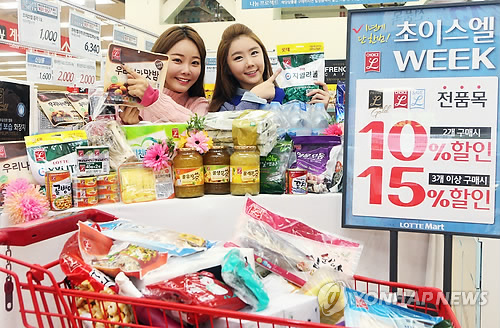 PB goods are usually 20 to 30 percent cheaper than other brand goods, and as they are becoming increasingly popular, more customers are building trust in certain brands. (image: Yonhap)

SEOUL, May 14 (Korea Bizwire) — As large retailers are suffering from negative growth, private brands (PB), or private labels (PL) are offering a ray of sunshine to retailers, as sales of PB goods have increased 20 to 30 percent in the first quarter compared to the same period last year.

PB goods are usually 20 to 30 percent cheaper than other brand goods, and as they are becoming increasingly popular, more customers are building trust in certain brands.

Sales of Home Plus PB goods in the first quarter increased 21 percent, while sales of all goods combined only increased 0.9 percent. PB products now account for 28.4 percent of Home Plus products.

Sales of PL goods also increased 15.4 percent at E-Mart. E-Mart personnel are even saying that its 1.1 percent sales increase in the first quarter, which was the first year-on-year positive growth rate in 13 quarters, was due to the popularity of PB goods.

An individual with knowledge of Lotte Mart’s operations said that although there was some mistrust in private brands in the past, these days they are among the most competitive goods, as they are produced by well-known manufacturers.

CU said that it would focus on developing personal hygiene PB goods in the future, as it has been only developing snack PB goods so far.

Home Plus also said that it would increase PB production, saying that as more than 90 percent of PB manufacturers are SMEs, the current boom could also result in a positive synergy effect on them.