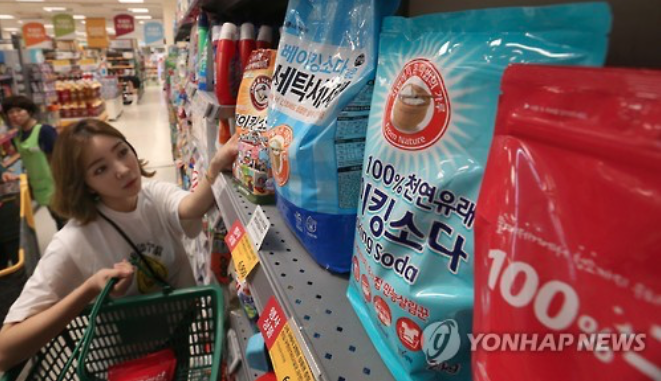 No-poo-jok (no + shampoo) is a word used to describe people who don’t use shampoo products with chemicals. These people use baking soda and vinegar to wash their hair. (image: Yonhap)

A big data based AI institute, Daumsoft, analyzed over 9.3 billion tweets and 723 million blog posts from January 1, 2011 to June 2, 2016, and discovered that the use of words that disapprove of chemical products is on the rise.

The institute even noticed the emergence of several newly-coined terms.

No-chemi-jok (no + chemicals), a word used to refer people who reject products containing chemicals, made its first appearance on social networking services this year. So far, the term has been used 283 times.

No-poo-jok (no + shampoo) is a word used to describe people who don’t use shampoo products with chemicals. These people use baking soda and vinegar to wash their hair. No-poo-jok, which was only used 63 times in 2011, was used 5,485 times in 2015.

Words like ‘natural’ and ‘environmentally-friendly’ were some of the more constantly used terms, with an average annual use of around 1 million times.

“Never before in the history of SNS has the public  paid so much attention to warning labels on products containing chemicals,” said a Daumsoft official. “Individuals are increasingly pursuing safety over convenience, and they’re sharing their know-how in replacing chemical-containing products from their daily lives.”