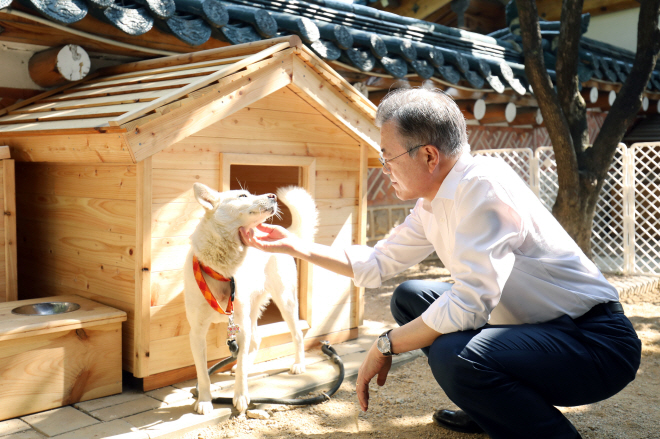 SEOUL, Nov. 12 (Korea Bizwire) — One of the two dogs given to President Moon Jae-in by North Korean leader Kim Jong-un as a gift after their third summit in Pyongyang in September has given birth to puppies, Moon said Monday.

The North’s leader gifted the pair of Pungsan-breed dogs, one male named Songkang, and a female named Gomi. Moon said in a Twitter message that Gomi gave birth Friday to six white puppies — three male and three female — and all look healthy.

“As the pregnancy period of dogs is about two months, Gomi must have come to us pregnant,” Moon said. “As six were added to the two given as a gift, this is a great fortune. I hope inter-Korean affairs will be like this.”

Cheong Wa Dae said it will reveal the newborn dogs to the media later.

Their birth brought the total number of Pungsan-breed dogs Moon is raising to nine as he already owned one.

The Pungsan breed originates in a mountainous region of the North. They are known to be agile, clever and ferocious toward beasts, but friendly and loyal to their human masters.

Along with Jindo dogs, bred from the southern island of Jindo in South Korea, the breed is considered one of the two most prized canine species on the Korean Peninsula.