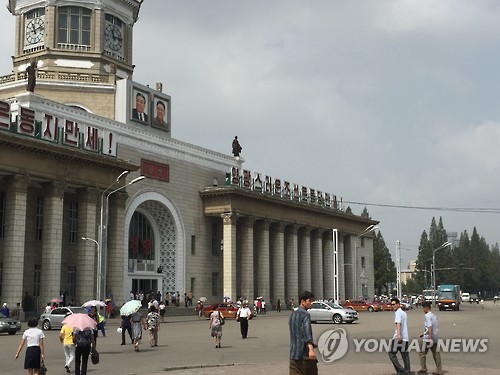 Citizens were seen in a relatively calm mood, some walking busily across the plaza in front of the Pyongyang Station and others warmly chatting. (image: Yonhap)

PYONGYANG, Aug. 23 (Korea Bizwire) — In spite of sharp military tension on the peninsula, it appeared to be business as usual for North Koreans in Pyongyang.

Citizens were seen in a relatively calm mood, some walking busily across the plaza in front of the Pyongyang Station and others warmly chatting.

Yonhap News Agency, South Korea’s largest news outlet, was allowed to look around the downtown area on Saturday, along with other foreign reporters. They were visiting the North’s capital to cover international youth football games.

Inter-Korean tension was at a peak hours before the South and the North announced rare high-level talks to avert a looming conflict. The two sides are scheduled to resume the talks Sunday afternoon.

Interviewed by Yonhap, the North’s citizens did not hide their animosity toward the South.

“It’s the South’s military officials and bellicose military forces that deliberately link any mishap in the South with the North,” said Ri Ju-hyon, a Pyongyang citizen, citing the 2010 sinking of a South Korean warship.

Ri also claimed that the South made up the stories of the land mine attack and artillery exchange at the border.

After its own probe, the South’s military said the North is clearly behind the Aug. 4 land mine attack in the Demilitarized Zone, which seriously wounded two South Korean soldiers.

On Thursday, the North also fired two rounds of artillery shells at the South, promoting it to return fire.