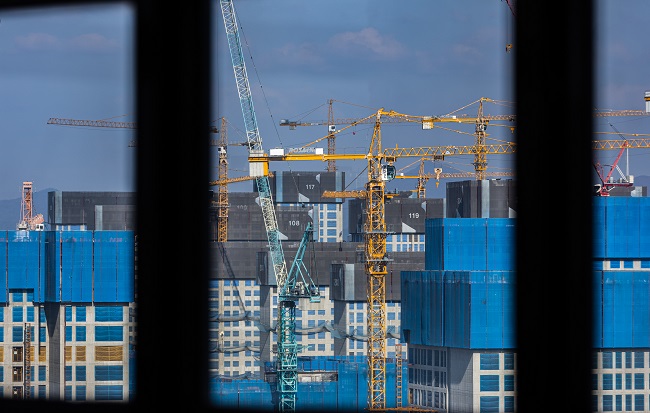 This photo taken on Oct. 24, 2022, shows a construction site of an apartment complex in east of Seoul. (Yonhap)

SEOUL, Nov. 28 (Korea Bizwire) — The number of residential properties whose ownership changed due to forced sale by auction marked a sharp increase this year compared to a year ago.

According to the Supreme Court, the number of apartments, villas and residential officetels whose ownership shifted due to forced sale by auction stood at 4,805 cases in the first ten months of this year, up 25.3 percent from a year ago.

In the greater Seoul area, Seoul marked a twofold increase compared to 2021, while Incheon recorded 56 percent growth. However, Gyeonggi Province recorded a decline of 11.9 percent.

Forced sale by auction refers to an auction resulting from litigation by creditors when landlords fail to repay debts.

At present, there are many instances in which the current “jeonse” price is lower than two years ago.

Accordingly, the number of cases where tenants force such auctions to get back their jeonse deposits is likely to increase.

According to a real estate website R114 survey of 2,784,030 apartments in the greater Seoul area last month, the share of apartments whose jeonse prices declined compared to two years ago stood at 2.8 percent.

Under the jeonse system, tenants pay a large lump-sum deposit, known as key money, to the landlord, which is then returned at the end of the rental agreement. During the lease period, the tenants do not pay monthly rent.